Today I’m pleased to welcome Janice J. Richardson, author of The Spencer Funeral Home Niagara Cozy Mystery Series. The first book in her series, Casket Cache, is already on my Kindle! I love her unique take on the cozy mystery genre and Canadian setting. Now lets take a few minutes to get to know Janice and her books a bit better…

My 5 Star Review of Casket Cache 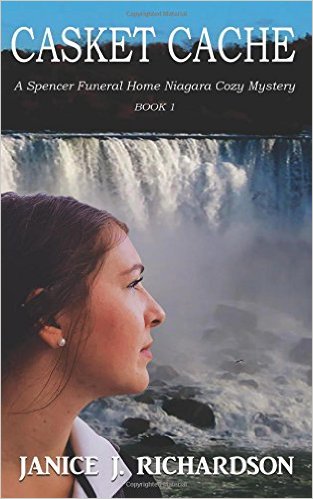 Casket Cache is an extraordinary cozy mystery for as much the setting as the author’s style of writing. In addition to being a well-built mystery, the story offers an intimate glimpse into the life of a funeral director and the inner works of a funeral home.

The author is able to inspire a level of compassion and empathy I’ve never before encountered in fiction. After reading this book, I actually felt hopeful and reassured, despite the sometimes heavy topics discussed.

It is first and foremost a mystery. The story follows Jennifer, a young woman who has just moved to Niagara, Canada to start work as the funeral director of funeral home left to her by her recently deceased uncle. Before she can get settled in, there is a break-in. The responding police find a large sum of money in one of the caskets and the circumstances point to Jennifer’s involvement.

Jennifer, along with her new co-workers and a few old friends, has to figure out what’s really going on and who is truly involved before she’s arrested. Break-ins, physical threats, illegal drugs, the disappearance of a Casino pit boss and someone trying to run Jennifer off the road, make it clear that there’s more going on than the local police suspect.

The central mystery is resolved in a satisfactory way and the last few chapters set up the cast and story for the next installment of this (currently) three part series.

Throughout the novel, Jennifer’s work as a funeral director continues; she prearranges funerals for the terminally ill, picks up murder victims from crime scenes, prepares bodies for cremations, and meets with chaplains to help console those who have lost someone special to them. The author’s moving descriptions of the tragedies encountered daily on the job are filled with compassion, sensitivity and empathy. It is clear she has drawn deeply on her actual experiences as a funeral director, and this story is much better for it. She’s able to tap into a level of emotional depth not usually found in cozy mysteries.

Jennifer’s profession was why I initially hesitated reading this book and didn’t request to review it for Mystery Thriller Week. However during MTW, I read a few interviews with the author and was so fascinated by her, I decided to take a chance on the first book in the series. Though death is a topic most of us try to avoid, it is an inevitable part of life. Like most forty-year-olds, I’ve buried too many loved ones. It is reassuring to know there are people like Jennifer out there, who truly sympathize with someone’s loss.

I highly recommend this to fans of mysteries, amateur sleuths, and cozies. It is something different and definitely worth the read. I look forward to reading the rest of the series. 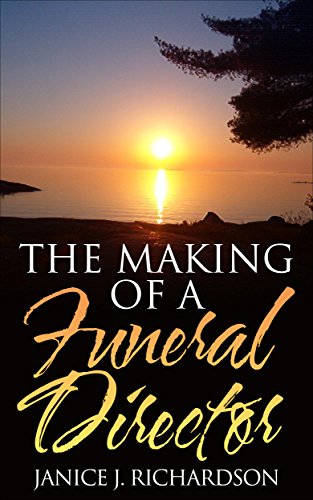 I am an identical twin and a special needs mom.  My youngest is now in a family home program. I have three children and nine grandchildren.  I moved to Niagara five years ago and am quite happy to be living down south again.

Writing was not on my radar when I was a mom. The Making of a Funeral Director was drafted over several years when I was a funeral service student. I was working at a transfer service to pay for college. It was such an interesting experience I kept notes, which I compiled and put into a manuscript.

Publishers were not interested. It was waylaid and eventually misplaced.

Years later my former husband sent me a box he had found, the one with the manuscript. I put it on a shelf and ignored it for three years. With the advent of self-publishing, I resurrected it, polished it and published it.  That was so addicting I kept going with The Spencer Funeral Home Niagara series.

Sitting in a  recliner in my bedroom with a laptop.  I never deviate, it’s the only place I feel comfortable writing. 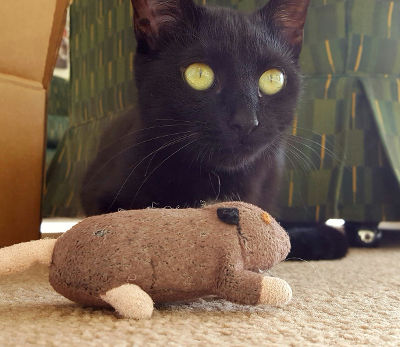 Total silence.  Music is distracting.  So is Vegas, our cat. 🙂

All three do. I worked as a medical office assistant for years before entering funeral service. That’s how I learned to observe behaviour and immerse myself in ongoing education.

Research is the most interesting part of writing a book.

Much of my writing is shaped by the fact that I have two children and four grandchildren with Coffin-Lowry Syndrome.  Special needs parents carry a grief that never resolves.and It has shaped me.  I am grateful for its lessons. 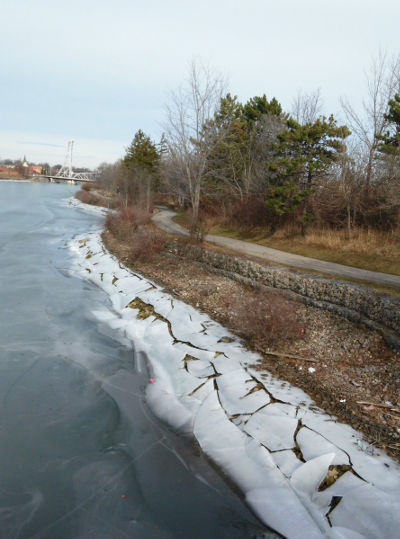 Winter’s Mourning was inspired by the bleakness and loneliness of the Niagara Parkway and the Falls in winter. It is so beautiful. Also, not all mysteries are murder, so this book does not have a murder, making it a modified cozy.  When I was doing coroner’s calls I saw enough deprivation and homicides. Winter’s Mourning is a continuation of Book 1, Casket Cache.  It was a fun book to write.

The Niagara Region is known for its wine.  There is more to the region though. For example, I was not aware we could grow lavender in Canada, so I read about the lavender fields in Niagara and hope to visit them sometime. It was fun to incorporate it into the story.  I have contacted funeral service professionals with questions about current practices, surprisingly most funeral directors would not speak to me.  I never refuse to answer anyone’s questions about funeral service and their reluctance to talk about their work puzzles me. The few who did help were from the same funeral home and provided important updated information. I make sure I recommend their funeral home when asked.  I contacted a few local lawyers only to be brushed off as well. Much of what I needed about court procedures is available online, so I will make do.  Do other writers face reticence when researching?

What are you passionate about aside from writing?

Volunteering in the area of poverty law advocacy and special needs advocacy has been a long time passion. I am a news junkie and I love to putter around thrift shops. 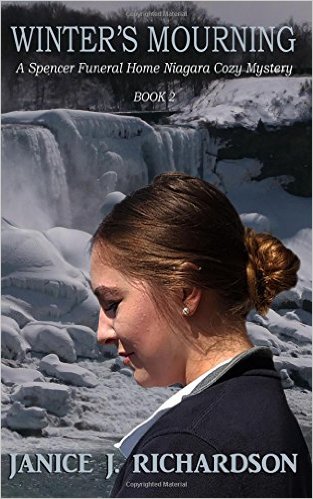 Yes indeed. I am most like Jennifer.  I love Marcia’s sarcasm.  Jennifer struggles emotionally but tries to grow and adapt.  She can be intense and self-deprecating. Marcia is equally committed to funeral service, but she is fun and more balanced than Jennifer. I have a tiny bit of Marcia in me.

Just winding down Book 3, Grave Mistake.  Trying not to jump ahead to Book 4, First Call.  It will have a bit of a shock factor and I am eager to start the research.  I may switch them around.

The UK and, Europe and Scandanavia.  I am drawn by the history and the people. For some reason, I want to see Belgium. Canada is a relatively young country.  I don’t know my full background, I was adopted.  Chances are the UK is where my ancestors came from.

What do you want readers to get from your books?

Kindness, compassion, knowledge, hope.  If a reader is afraid of death or funeral homes, I hope the books educate them and reassure them that they are not alone. We will all die, we all grieve. If they learn something new and are entertained in the journey, then I have accomplished my goal. 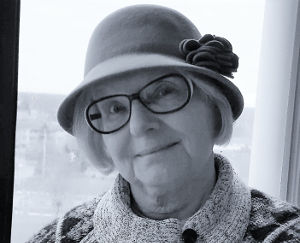 Hailing from the Niagara Region in Canada, Janice is a retired funeral director. Prior to her funeral service career she was employed as a university library technician, a medical office assistant, and a small business manager.  At Humber College she worked as a peer tutor in anatomy, pathology and physiology and was the recipient of the Wilfred R. Scott award.  She continued with post graduate training, receiving the designation of Certified Funeral Service Practitioner.  Janice is retired, filling her days with writing, reading and friends. To find out more about Janice and her books, visit her Goodreads author page.

Funeral homes are supposed to be quiet… Jennifer Spencer inherits her uncle’s funeral home. Her move to the Niagara Region into the apartment above the Home went well, but in the first week alone, someone breaks into the funeral home. Then, Jennifer finds cash in a casket, a lot of cash. Certain it has something to do with the break-in, she’s unable to convince the police and winds up on their list of suspects! But Jennifer has families to serve and funerals to arrange; that is her number-one priority. Someone sinister and dangerous wants the cash back; that’s their number-one priority and Jennifer Spencer, funeral director, is in the way. A cozy mystery with heart, compassion, and humour.

Not all mysteries involve murder… Funeral Director Jennifer Spencer’s walk along the Niagara Parkway on a rainy, cold day leads her to Winter, a distraught young woman who isn’t speaking. Travis, the temporary director hired when Uncle Bill passed, is still out for revenge. That won’t happen if she listens to the police officers assigned to protect her … but she doesn’t. Can Jennifer survive her own harrowing ordeal in order to help Winter get her life back? Book 2 of The Spencer Funeral Home Niagara Cozy Mystery Series.

The Making of a Funeral Director

10% of being a Funeral Director is dealing with the dead, the other 90% is helping the living. Perhaps the most asked personal question of any mortician/undertaker/funeral director is why? Why would you want to be a funeral director? Janice Richardson heard that a lot. Not always an easy question to answer. Funeral directors the world over share the same goal, to help people. Grief and death are something all human beings face. But why be around death and grief most of the time? Why not medicine, or police service, or accounting? Someone has to do it and when Jan was 8 years old she knew that would be her career choice. What does a funeral director do with their day? What kind of education do they need? From the first time transferring a body to the funeral home and into the prep room, to coroner’s calls, and stillbirths, journey with Janice through a fulfilling career in an often misunderstood profession.

Buy her books on Amazon or Kobo now.