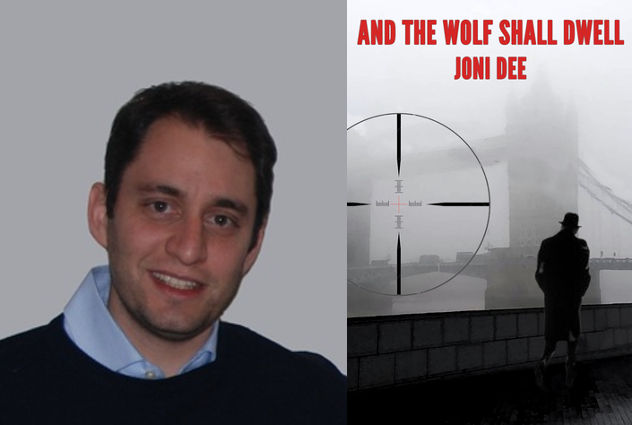 It is my pleasure to welcome Joni Dee, author of And the Wolf Shall Dwell, to my blog today! He’s one of the many talented mystery and thriller authors participating in Mystery Thriller Week in February of 2018. You can sign up now as a Super Fan to be kept abreast of giveaways, interviews and special sales before and during the event. But first, take a moment to learn more about this versatile writer, his debut novel and BookGobbler.

My writing career has really just begun. I (still) work in finance in the City of London and I’m happily married with 2 toddler children (a 4-year-old girl and 2-year-old boy). I always wanted to write, in a sense it burned within me, but I have never felt my writing was good enough before this last novel.

My writing genre is political or espionage thriller, which I take extreme pleasure from as a reader. I’ve moved to London 7 years ago, and one might say that this city has inspired me to try and become the next “John le Carré” or at least get my stories published …
I have been working on my now published debut novel “And the Wolf Shall Dwell” for about 5 years, and was very lucky to find Blue Poppy Publishing – my publisher – who had believed in me and helped me get my book “out there”.

I have recently started working also on a project called BookGobbler which is meant to help authors gain exposure and build readership. I have also started writing my 2nd novel – keeping the writer flame burning – so you can say that I’m keeping quite busy. LOL. One of my mates always says: “there aren’t enough hours in the day” and I’m beginning to see that he’s absolutely write.

The ultimate reply to this question is I’d take the Bible to a desert island, as it has so many different stories and allegoric tales. I agree. However, to keep my answer unique (and not being a bore) I would list two books, either one I can read over and over again, and surprisingly none of them are of my own genre: Dune by Frank Herbert or Taipan by James Clavell.

Both tell an epic story, soaked with political intrigue, human nature and ambition. Both have so many sub-stories and tales that they are a universe of their own, and funnily enough both take place in eras different lightyears from our own (Dune being in the far far future and Taipan being in the 19th century) but they both apply splendidly to our lives/political environment of today, with their underlying message.

I need silence, any distraction (even a soundtrack) immediately makes its “guest appearance” in the novel. Well, low music is fine… However, I live in a small flat with 2 toddlers, which means that even in the middle of the night I’m not always getting enough quiet time (or if they are finally sleeping – I tend to fall asleep on the keyboard, trying to decipher what it is that I’ve written, on the following morning). I do find that planning a writing session never works, so if I have an idea I’ll try to disengage myself from the havoc of my home and write. Some of my best work was done when my kids are visiting their grandparents abroad with their mom or surprisingly when I’m on the London tube.

Deep inside I’m secretly a geek: when I do get quiet times, I can watch (with passion) historical documentaries on the History Channel. I have an MBA degree and I speak 4 languages. 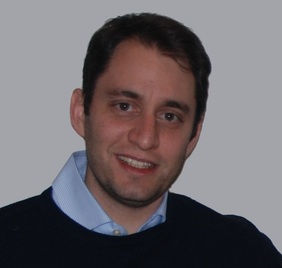 Well, that’s a complex question. First of all, I’m a Chief Sergeant (Ret.) from military intelligence. So, while I never explicitly write about things I’ve encountered in my service, I do have a broader understanding of how the intelligence community works, enough to put it into a framed plot, which introduces the murky side of things to the “innocent reader”.

Second, research, research, research! I’m dividing this to two: you can learn plenty about the British intelligence community by simply opening the SIS and MoD financial reports which are available to everyone online. The second thing is that I try not to write about places I’ve never visited. If I’m describing the SIS building at Vauxhall Cross in London, than you can trust me that I’ve taken the kids on a day trip of watching this hideous building until I was satisfied I can write about it. Okay, so I’ve never been to Ar-Raqqah in Syria, but I’ve seen enough dilapidated Arab towns and villages to paint a pretty decent picture.

So, first of all it’s John le Carré, the way this guy, Richard Cornwall, writes suspense… wow! It goes to show that you don’t need exaggerated action scenes like other “secret agents” novelists to draw readers in. A well-constructed, plausible plot, with three dimensional characters that have everyday problems, is quite enough. I try to implement these things as rules of thumb for my writing.

But most important for me and “the Wolf” was the City of London. Just walking around the labyrinth of streets packed with history and grandeur is enough to spin my head around. Whenever I got stuck I just had to walk around London and start painting a picture in my head, the plot soon followed. It was the opening scene of “And the Wolf Shal Dwell” that I came up with as I was daydreaming while, much like the hero John Daniel, I walked through Liverpool street station on a cold London morning. The same day, after work, I sat down to write the scene and the rest is history. 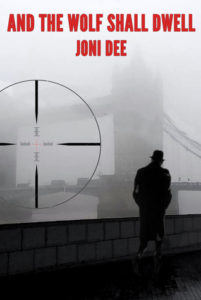 First of all I love all the characters. As opposed to what some of my colleagues think – John Daniel is not based on me (although there are some similarities). Now, this may surprise you, but my favourite character in “And the Wolf Shall Dwell” is the semi-villain Sammy Zecharia, the Mossad agent. Sammy is the ultimate handler, the despicable fixer, As Ishmael was described in Genesis 16:12 “his hand is against everyone and everyone’s hand against him, and he shall dwell over against all his kinsmen”.

The thing is that Sammy is not a villain, at least not in the traditional sense of the role. He does what he does out of pure ideology, he really believes he is playing a key role in making sure things will go down as planned, in the best interest of his country. If people get hurt it’s just collateral damage, he can live with it. I love this ambiguity of doing wrong and right at the same time. And I love his short temper.

I also love Katie Jones, the complex mixed cultural-mixed race investigating journalist. But she had such a minor role in “the Wolf” that I’ll definitely make her a key character in the next novel.

Running BookGobbler.com, which is a marketplace where authors get exposure and readers get free books, makes it impossible for me not to read other writers’ work. Also, I’m quite the book worm, so you wouldn’t catch me without my Kindle on the tube, for my 35 minutes-times-two commutes per weekday. I can’t honestly say that what I read doesn’t affect my writing, but I do my best to separate these two universes. Having said that, if you are reading “And the Wolf Shall Dwell” and some parts of London seem extra dark, you can pretty much count on the fact that I was reading Derek Raymond’s superb noir crime thrillers at the time.

Writing-wise, I’m trying to write the second book in the John Daniel / Adam Grey universe. Every book is a standalone, and it is not going to continue “the Wolf” but it does take place months after it.

In general: John, who by now has done a few freelance assignments for MI6, is in Paris, and happens to come across some ISIS driven plot. Grey is in London and in Cornwall, investigating a colleague’s murder. Brexit is underway, right wings extremism is raging in Europe and the stories interlink – so it’s going to be very interesting, once I know how it ends. LOL.

Thanks for stopping by, Joni!

You can pick up Joni Dee’s debut, And the Wolf Shall Dwell, here on Amazon or Blue Poppy’s paperbacks.  Connect with Joni via his website, Twitter or Facebook. 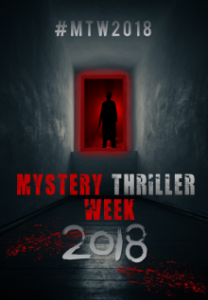 For one week in February, more than 200 award-winning and bestselling mystery and thriller authors come together to celebrate these genres. That means prizes, giveaways, live chats and more fun surprises.

Be sure and sign up now to be kept up to date. 🙂