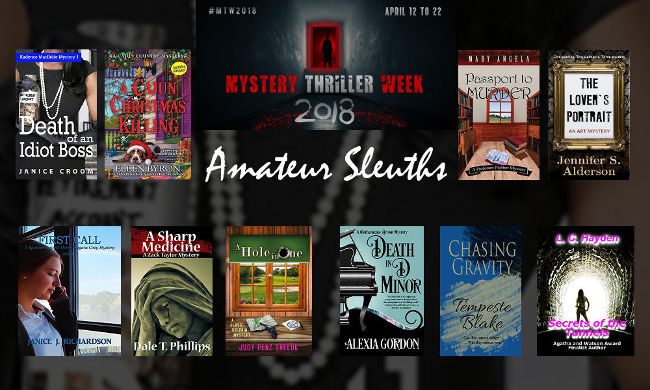 Today I would like to introduce you to Mystery Thriller Week (April 12-22), an annual event celebrating the Mystery and Thriller genres!

Click on the book cover to link to Amazon where you can read an excerpt and learn more about the author. You can find the complete list of authors participating in this event here.

According to Goodreads, “an amateur sleuth mystery features a protagonist who, having no direct ties to the police or other investigative agency, stumbles upon and sets out to solve or help solve various crimes, most notably murder. They do not receive monetary compensation for their investigation.”

This description perfectly sums up these novels. Fancy yourself an armchair sleuth? Then cozy up with one of these gripping reads and get cracking!

I look forward to seeing you there! 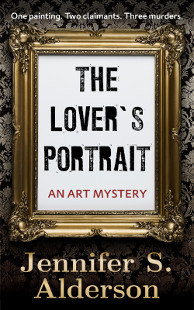 Available as audiobook, eBook and paperback. Whispersync for Voice ready.

Passport to Murder by Mary Angela 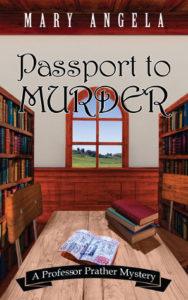 This semester, it seems that Professor Prather’s dreams are about to come true. Ever since she was a young girl, she’s imagined going to France, and her French colleague, André Duman, has finally made that trip possible. Over spring break, she and André are to lead a group of students and faculty to Paris to explore the City of Light.

But before she can utter her first bonjour, a professor dies, and they are stuck in Minneapolis. She returns to Copper Bluff with an unstamped passport and a mystery to solve. When André becomes the prime suspect, Emmeline puts her research skills to good use, determined to find out who really killed the professor and spoiled their spring break plans. With thirteen travelers assembled, the possibilities are varied and villainous. Luckily, her dear friend and sidekick, Lenny Jenkins, is close by. Together, they will sort through the conflicting clues even if it costs them time, trouble, or tenure. Book 2 in the Professor Prather Mystery series. 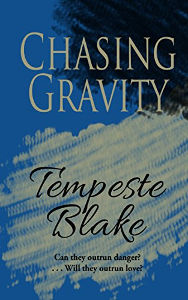 Tish Duchene wonders if she’ll ever be able to live a normal life after what happened in Iraq. She’s left the army behind, but the horror is indelibly etched in her mind. And just when she’s ready to find a nice corner to curl up in and lick her wounds, her mother, a pharmaceutical executive, goes missing. Tish would be more comfortable with a solo mission, but she needs the expertise of a certain private investigator, Dylan Tierny, a man who infuriates her from the get-go.

Dylan has fought his share of demons, so what’s a few more? But falling in love is the last thing on his agenda as he battles the dark side of a drug company deep in a cover up. Pile on chaos in his personal life and it’s enough to drive him back to the vice that nearly cost him everything and everyone he cared about.

Tish and Dylan traverse a bridge of uncertainty, redefining with every step what it is they can’t live without.

Who they can’t live without.

Before it’s too late. 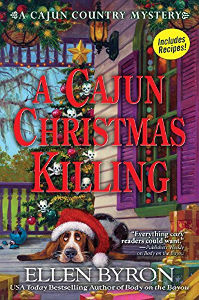 Maggie Crozat is back home in bayou country during the most magical time of the year. In Pelican, Louisiana, Christmastime is a season of giant bonfires on the levee, zydeco carols, and pots of gumbo. Except, this year, the Grinch has come to stay at the family-run Crozat Plantation B&B. When he floods travel websites with vicious reviews, Maggie thinks she’s identified him as rival businessman Donald Baxter. That is, until he’s found stabbed to death at Maggie’s workplace. And Maggie and her loved ones become top suspects.

The Crozats quickly establish alibis, but Maggie’s boyfriend, Detective Bo Durand, remains under suspicion. With Bo sidelined during the investigation, Maggie finds herself forced to work with an unlikely ally: longtime family enemy Rufus Durand. Her sleuthing uncovers more suspects than drummers drumming, and lands her in the crosshairs of the murderer.

The sleigh bells are jingling, and the clock is ticking for Maggie and Rufus, who must catch the killer or it will be the opposite of a Joyeux Noël in A Cajun Christmas Killing, the recipe-stuffed third installment of USA Today bestselling author Ellen Byron’s Cajun Country mysteries.

Death of an Idiot Boss: A Laugh Out Loud Mystery by Janice Croom 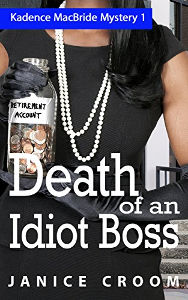 Ever had a boss you’d happily kill? Somebody beat her to it.

Corporate climber, Kadence MacBride, is smashing the glass ceiling with her size ten pumps, or so she thinks. Not only does she get passed over, her promotion goes to her idiot employee, and he becomes her new boss.

Worst day ever, or so she thinks. Worst doesn’t have a floor, and idiots tend to get themselves killed.

Police Captain Cooper has hit his own glass ceiling. Solving this case quickly will break him through it, so Cooper doesn’t care what’s true. Since Kadence makes the easiest target, he’s gunning for her.

Long buried secrets from the Civil Rights era seek vengeance from the grave. Kadence has her own secrets to keep.

There are some things you don’t delegate. Adding amateur sleuth to her resume, Kadence sets out to find the real killer. If she fails, she’ll trade her red power suit for an orange jumpsuit. 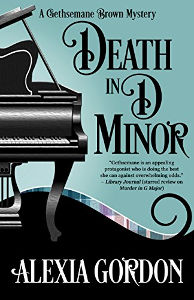 Gethsemane Brown, African-American classical musician and expatriate to an Irish village, solved a string of murders, led a school orchestra to victory in a major competition, and got used to living with a snarky ghost. She can rest easy over the Christmas holiday. Right? Wrong. The ghost has disappeared, her landlord’s about to sell her cottage to a hotel developer, and her brother-in-law is coming for a visit—with one day’s notice.

She scrambles to call her spectral roomie back from beyond and find a way to save the cottage from certain destruction. But real estate takes a backseat when her brother-in-law is accused of stealing a valuable antique. Gethsemane strikes a deal with a garda investigator to go undercover as a musician at a charity ball and snoop for evidence linking antiques to a forgery/theft ring in exchange for the investigator’s help clearing her brother-in-law. At the party, she accidentally conjures the ghost of an eighteenth-century sea captain, then ends up the prime suspect in the party host’s murder. With the captain’s help, she races to untangle a web of phony art and stolen antiques to exonerate herself and her brother-in-law. Then the killer targets her. Will she save herself and bring a thief and murderer to justice, or will her encore investigation become her swan song?

Secret of the Tunnels by L.C. Hayden 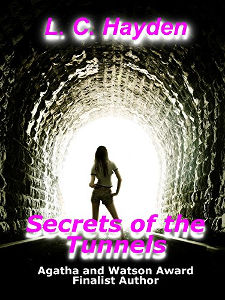 A stolen Chinese treasure, corruption, a fight for power, murder, and betrayal are all connected to the tunnels. And the roads that lead to them are paved with lies, betrayal, and murder.

Can Connie survive the Secrets of the Tunnels?

A Sharp Medicine by Dale Phillips 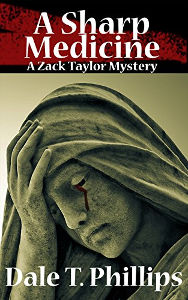 Zack Taylor’s life is once again in shambles. Having narrowly escaped death, guilty over the pain he’s caused a loved one, he’s hurting and angry. When looking into the disappearance of a reporter, Zack’s death wish may be his cure for his troubles as he uncovers corruption and evil in a world of politics, passion, and power. 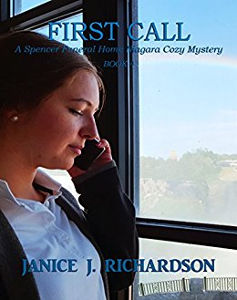 First call. In a funeral home, it means a death has occurred and it is the family’s first contact with the funeral director.

One of her staff is murdered. The killer makes a second attempt.

As influenza claims more and more lives, overwhelmed personnel succumb to exhaustion, grief and illness. Jennifer and her staff struggle to push through the overwhelming workload caused by the pandemic’s deadly rampage.

Everyone has a breaking point and Jennifer is no exception.

A Hole in One by Judy Penz Sheluk 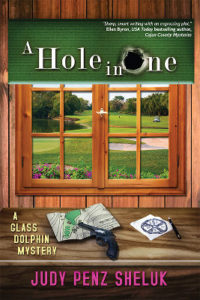 Hoping to promote the Glass Dolphin antiques shop, co-owners Arabella Carpenter and Emily Garland agree to sponsor a hole in one contest at a charity golf tournament. The publicity turns out to be anything but positive, however, when Arabella’s errant tee shot lands in the woods next to a corpse.

They soon learn that the victim is closely related to Arabella’s ex-husband, who had been acting as the Course Marshal. With means, opportunity, and more than enough motive, he soon becomes the police department’s prime suspect, leaving Arabella and Emily determined to clear his name—even if they’re not entirely convinced of his innocence.

Dogged by incriminating online posts from an anonymous blogger, they track down leads from Emily’s ex-fiancé (and the woman he left Emily for), an Elvis impersonator, and a retired antiques mall vendor with a secret of her own.

All trails lead to a mysterious cult that may have something to do with the murder. Can Arabella and Emily identify the killer before the murderer comes after them?

Be sure and read my interview with Judy here.