It is my pleasure to welcome author Kait Carson to my blog today! Her adventurous series of mysteries transports readers to Belize, the Cayman Islands, and Florida. I really enjoyed diving and solving murders with Hayden Kent in Death by Blue Water (read my Goodreads review here), and cannot wait to read more of her work.

I think fearless is a great way to describe Kait, an avid diver who survived a lightning strike and learned to ski while undergoing chemotherapy. I hope you enjoy learning more about this fascinating mystery author, her life, and her inspirations. 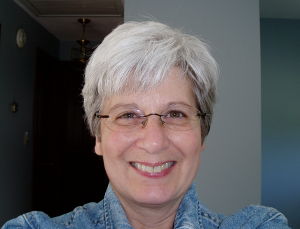 I was the proverbial late child. There are nine years between myself and my nearest sibling and that means that all the kids in the neighborhood were well older than I.  End result? I became an adventurous independent scrapper, a problem solver, and a child who could entertain herself and others– often by storytelling. Good to know things haven’t changed.

My books draw from my hobbies and adventures. Both of my title characters are runners and pet owners Hayden Kent is a scuba diver. In Death Dive, the next book in the Hayden Kent series, her work takes her to Belize and the Cayman Islands.  The Catherine Swope books are set in Miami. The city never fails to fascinate. Sanctuary City, next up in the series, is a thriller that explores immigration and drug issues unique to this gateway city and delves into Catherine’s deepest fears. She’s changed at the end of Sanctuary City, and the series moves on in a new direction. 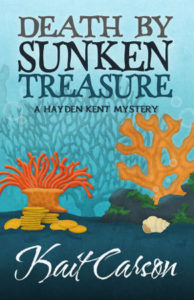 You mean I can’t travel anywhere in the world? Why ever not! There was a time when my boss would take my passport away if we had a big case coming up. I have been known to fail to drive past the airport- and buy a ticket for the next plane out, destination anyplace.  That aside, I would travel back in time. I would love to retrace Mark Twain’s steps in Innocents Abroad but be able to do it as I travel now, not as a tourist, but as someone going off the beaten track. Although I have seen much of the world, it has been the modern, shrunken world. I would like to see people and culture as it was.

Do you prefer to write in silence or with background music?

Silence. I tried writing with music. I envy people who can write to a soundtrack, I think it must help give characters individual voice, but I find I can only listen to one thing at a time. Characters, or music!

Let’s see, I’m ambidextrous thanks to teachers who switched me from left handed to right as a child. Although I can write with both hands, and at the same time – I can only effectively use tools with my left hand. English was the last language I learned. I spoke French, Italian, and German as a child and learned English on the playground. I’ve been struck by lightening (and lived to tell about it). I was indoors at my sink, the storm was nowhere in sight and barely in sound. The bolt came out of the spigot and exited through the window. Made me a fatalist – I’ll even shower in a thunderstorm. If it wants you, it will get you. I’m a breast cancer survivor. Lobular, stage II, class of 2008. I always want to know what type of cancer people had, there’s a difference among them, and few ever talk about that. So, I make sure I say. Cancer free, chemo was yucky, and I learned to snow ski at Sugarloaf in Maine while I was having radiation. 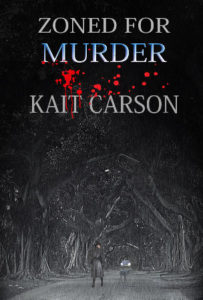 Telling stories. It all starts with the story for me. Generally, there will be something that ignites a spark-it can be a news story, a photo—for Sanctuary City it was a photo of pod houses in Florida City – although in real life, they were demolished by the time the story takes place, story magic lets them live briefly again.  Imagination takes over coupled with an issue I want to explore. In the case of Sanctuary City, the issue is murder and Miami’s dosey doe relationship with the concept and enforcement of a Sanctuary City and what that does to Miami residents who may become subject to deportation and forced to leave behind legal relatives. Add a dash of the reality of what it takes to support yourself when you can’t get a legal job and you have the framework of Sanctuary City.

What are you passionate about, aside from writing?

Animal rights. We have an obligation to be good to our critters. One of my work incarnations was running a no kill cat rescue. When you take on a pet, that animal becomes part of your family. Nothing gets my dander up quicker than people who take in a pregnant animal so their children can “experience the miracle of birth” and then dump the animal and its litter either in a kill shelter, along the road, or in someone’s yard. There is no need to buy an expensive pet when there are thousands of pets in shelters looking for homes. Adult pets come to you pre-trained and ready to love – adopt don’t shop and please spay or neuter.

Why have you chosen to write a series? 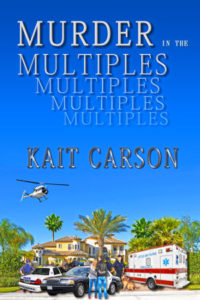 The eternal question. I set out to write two stand-alones. Then I realized the characters were not done with me! Catherine Swope was at a crossroads when I first met her. She had left one career and had no idea where to go with her life. When we leave her at the end of Zoned, she’s facing another choice – to go back to law enforcement or go into real estate. Two more unrelated professions would be hard to find. Even though she makes her choice in the closing scenes of Zoned, I had to know if she stuck with it, and how it worked out for her. In Murder in the Multiples she finds her feet as a Realtor, and a few bodies. Now in Sanctuary City, the stakes become more personal. Catherine is established in her work-life but, well, you’ll have to read the book to find out. Sanctuary City will be out this fall.  I envision her changing careers again and foresee another three book arc in her next incarnation.

Hayden Kent was a stand-alone that was sold to Henery Press as a three-book series. So far two of the books, Death By Blue Water and Death by Sunken Treasure have been released. Henery has the third, Death Dive, and we are awaiting a publication date.  I can envision another three-story arc for Hayden that takes her into new ground but keeps her in her beloved Florida Keys. 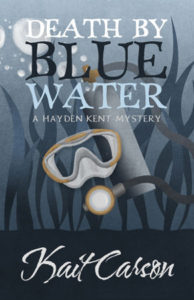 Yes, although Sanctuary City takes certain liberties – the body is found in front of houses that no longer existed at the time the story is set – I made sure that the houses were accurate. The acknowledgments will also contain a statement that I took license with timeline of the houses. Why use them? Because they did exist and they were unique. They provide a shorthand of setting and they give a glimpse of the exotic flavor and mystery that is part and parcel of south Florida. No reader wants a history lesson in fiction, but getting the facts right is important. The world is a small place. Enough readers will be familiar with your setting, topic, esoteric fact. Mess it up and your book, and you, lose all credibility.

Thanks so much for stopping by, Kait!