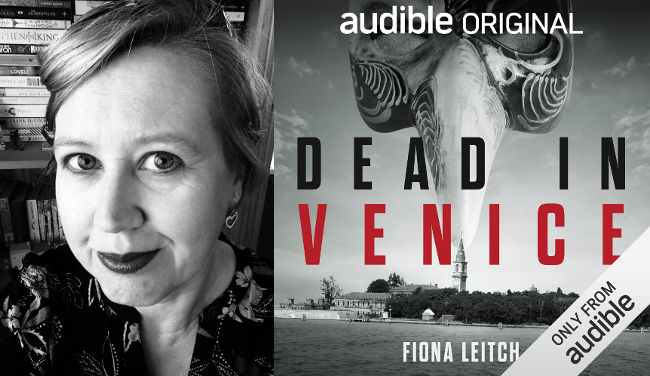 It is my pleasure to welcome author Fiona Leitch to my blog today! Her windy path to publication began with dreams of acting and screenplay writing, before one of her works-in-progress was chosen by Audible for production as an audiobook.

Take a moment to learn more about her audiobook, Dead in Venice, the importance of setting, and why her characters remind her of herself, as well as what’s she’s working on now.

I’ve always written. I wrote my first book (with chapters and illustrations!) when I was 8. It was about ponies, as I recall. My teacher read it out in class and everybody hated me. I was a horribly precocious child…

I wanted to act, but I’ve never looked like a leading lady and eventually I decided that if no one would cast me, I’d write my own roles! I started writing TV sitcoms in my late 20s and had lots of interest from some pretty big UK TV companies, but nothing really came of it and I became horribly depressed by the whole thing. I stopped completely when I had a child, and didn’t start again until about 5 years ago, when I decided I was going to write a massive blockbuster Marvel spin-off movie, just to see if I could.

I could! But no one wanted to make it or even read it…

So I aimed a bit lower and started writing my own original movie screenplays. I started to get some traction and recognition, but there was one particular script which hadn’t got anywhere but I loved too much to let it go: Dead in Venice. A novelist friend persuaded me that it would work really well as a novel, which I’d never really thought about after that initial school girl attempt; novels are a helluva lot more words than a screenplay and starting something that long and time consuming is a scary thought. But eventually I gave in to the idea and, using the screenplay as an outline, started to write.

It took me three weeks. I loved every minute of it. The moment I finished my first draft I entered it for the Audible Crime Grant award, in a spirit of reckless, devil-may-care bravado. And then I got my novelist friend to beta-read it and she came back with feedback that led to a few minor changes which made it so much better. I convinced myself then that my hastily-entered first draft had no chance of winning, so I forgot all about the Audible contest.

Three months later they contacted me to say it had been shortlisted. I was amazed. I sent them the second draft and convinced myself that I wouldn’t win; I’d been here before with a couple of screenwriting contests and felt I was destined to be always the bridesmaid, never the bride.

Then in May 2018 Audible contacted me to say – I hadn’t won! But they had decided to publish all three finalists as the standard was so high. I was sworn to secrecy and invited to the Harrogate Crime Writing Festival where it was announced, and the audiobook was released exclusively on Audible on 11 September 2018.

I now have a wonderful agent who is working hard to get Dead in Venice in print (it’s currently only on Audible). As well as my new-found passion for writing novels, I’m still writing screenplays (I currently have one on option to a producer in LA, and am hoping it actually makes it onto the big screen). I’m using both of these creative pursuits as an excuse to follow one of my other lifelong interests, travelling to new countries and discovering different cultures and food. Particularly food!

Victoria Wood and Peter Ustinov – two of the wittiest people to have ever lived. They would be so entertaining to talk to I wouldn’t need an in-flight movie…

I can’t write to music because I get too caught up in it – especially anything with vocals, as I tend to sing along! But at the same time I can’t write in silence, either; I need background noise. I usually write in front of the TV with day time programmes on, something I’m not terribly interested in so I don’t get distracted but enough to stop me feeling alone.

I always wanted to have my own study or writing room. My husband used to work from home, so our spare room was turned into his office, but when he changed jobs I decided to bag it for myself. It didn’t work. I ended up back where I always write – sat on the sofa with my laptop, hemmed in by cats and with the TV on. I’ve managed to write 8 screenplays and 2 novels like this so far, so if it ain’t broke I probably shouldn’t fix it!

Setting and locations are really important to me, I think because my background is in screenwriting – before I write a novel I envision it on screen. I actually wrote both my novels as movie scripts first, before adapting and expanding them into books. I used to work as a camera operator and video editor, so creatively I’m very visual.

This is one of those ‘it is but it isn’t’ questions, I think! It’s important for your story to be realistic, even if it’s total fantasy, because readers need to believe it. But at the same time not everything has to be true or completely accurate, in my opinion; it just needs to be feasible. The locations in my books are realistic because they ARE real – I’ve been to most of them  – but at the same time, if I say the carpet’s blue when it’s actually red in real life, does that matter?! There’s a danger when you’re writing to get sucked into doing so much research that you don’t get round to actually writing; it’s a rabbit hole that’s all too easy to fall down, because it’s procrastination (which all writers are prone to) but it feels like it isn’t! I tend to research just enough to get started, and if in the course of writing I realise I need to do more I either leave myself a little note to come back to or I go off and do it before going any further. I had one comment about Dead in Venice that there wasn’t enough police procedural detail in it – but I’m not writing it from a police point of view, I’m writing it from a bystander’s view, someone who wouldn’t know what the procedure was. For me, the most important (and enjoyable) research is into the locations, because it’s a great excuse for a holiday!

Yes! Probably a little too much in some cases… I started off writing screenplays, because I’m a frustrated actor and I decided that if no one was going to cast me I’d write my own parts! So a lot of the protagonists in those works are quite like me. But the one who’s most like me is Bella in Dead in Venice, because apart from being a writer too, she’s a bit mouthy, likes food (and sex) and is impulsive, sometimes with disastrous results!

I’m currently conducting the final polish of my next novel, Priceless, which is a romantic crime caper set in Paris. I’m also tweaking a romcom screenplay, also set in Paris, which may or may not end up as a novel too!

One thought on “Spotlight on Fiona Leitch”