My latest novel, Rituals of the Dead, came to be because I wanted to write a mystery about an Asmat bis pole. Considering the Asmat live in the Indonesian province of Papua, the setting for my historical mystery was easily decided.

These historical facts provided me with a wild cast of characters and events that I used as the basis for a mystery about bis poles and artifact smuggling.

Rockefeller was not Unique 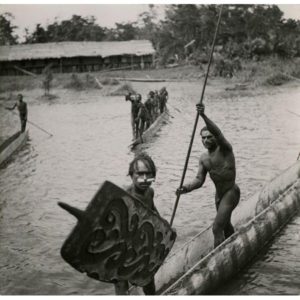 Because Rockefeller vanished before I was born, I didn’t realize how many theories there were regarding his disappearance or current whereabouts. At least, not until I began mentioning on social media that my work-in-progress was about an anthropologist gone missing in Papua. Inevitably, the circumstances surrounding his disappearance were recounted in comments on my posts. I also regularly receive emails from what I call “conspiracy theorists”, asking me to share their idea of what happened to him with the world.

Unfortunately for them, my character Mayfield is not a fictionalized version of Michael Rockefeller, nor is this book my theory about his death. Without spoiling the plot, I can even reveal my fictitious anthropologist disappears for a reason that’s never been linked to Rockefeller.

Trust me, that was difficult to do. Not only are there many theories about his demise, Rockefeller’s story is quite similar to those of other westerners working on the island in the 1960s.

Yes, Michael Rockefeller really did vanish while on a collecting trip in Dutch New Guinea – as my fictitious protagonist does. Also well-documented are the unexplained disappearances of other explorers and anthropologists during the 1930s through 1960s. Rockefeller’s vanishing received so much media attention because his father was the Governor of New York State at the time.

Rockefeller did offer more than usual for artifacts, just as my protagonist does. There are even instances recorded in Dutch colonial documentation of Asmat villagers asking permission to go on a headhunting raid so they could make a fortune by selling the newly acquired skulls to Rockefeller.

He was by no means unique. I’ve found other accounts of rich, western collectors who offered more than the going rate, particularly those on short acquisition trips who swooped in and bought up everything they could.

At least Rockefeller paid for the items he collected. The colonial archives are full of references to anthropologists, colonial government officials, surveyors, missionary workers and adventurers accused of stealing culturally-significant objects from Asmat villages.

One example is Carel Groenevelt, a professional collector who acquired thousands of Asmat artifacts for museums, including fifty of the seventy-five poles held in Dutch collections. Reverend Zegwaard acted as a middleman, helping him make contact with the Asmat and barter for their artwork. Groenevelt later admitted to finding poles on the ground in 1953 and taking them – without asking permission from, or paying, the locals who carved them. All of the artifacts he collected are still part of these museums’ collections.

Who is this Dutch missionary, Reverend Gerard Zegwaard, you may ask. He was the first priest to successful connect with the Asmat and his work paved the way for other churches to establish missions in the region. His is also well-known for his role as a protector of Asmat art. In many ways his early successes and passion for Asmat culture served as the model for another character in my novel, a priest named Kees Terpstra.

These facts provided the historical context and settings for my artifact mystery. The resulting story, all of the characters involved, and the restitution cases discussed in this novel are figments of my imagination.

No matter what the conspiracy theorists may say.

Rituals of the Dead: An Artifact Mystery is available as audiobook, paperback and eBook from Audible US, Audible UK, Amazon COM, Amazon UK, iBooks, Barnes and Noble, AbeBooks or Book Depository. Or read it in Kindle Unlimited.