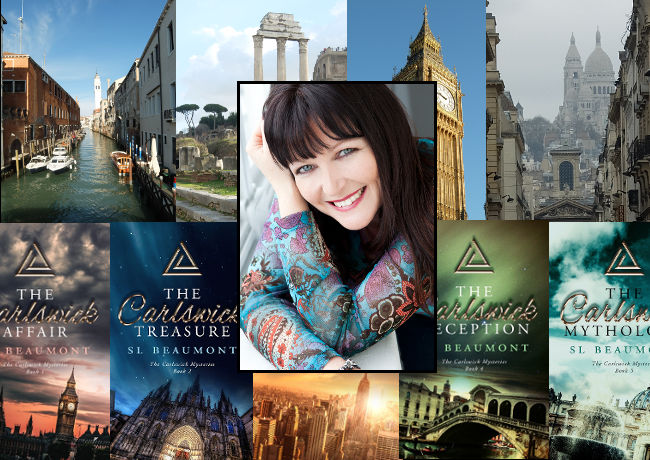 I am thrilled to introduce you to mystery author SL Beaumont! It is a real pleasure to connect with another writer who shares the same passion for art, World War II history, and travel. I hope you enjoy learning more about her bestselling mysteries, life in New Zealand, giving in to the travel bug, and more.

I write crime fiction and mystery novels, most notably the Amazon best-selling series, The Carlswick Mysteries and the upcoming standalone thriller Shadow of Doubt.

I live in beautiful New Zealand, which is only problematic when the travel-bug bites (which it does fairly often). As a result, I have taken many long haul flights from Auckland to various parts of the world.

Prior to becoming an author I worked in banking in London and New York. I’m the mother of three teenage boys (big food bill in our house) 🙂 and I have always loved to read, which continues to be the ultimate relaxation for me, especially if I’m reading on a plane travelling to somewhere exotic!

That’s a really tough question! There are so many places on my travel bucket list, but if I could go anywhere, it would be back to Europe – the art, the architecture, the long and varied history, the food and the culture still continue to fascinate me. My love of history usually helps determine the destination of my travels and the places I visit are a constant source of writing inspiration.

If your book takes place in the past, what inspired you to write about this particular era?

The Carlswick Mysteries are set in the present, but deal with secrets hidden since World War II. I enjoy early twentieth century history, so it was a natural back drop for me. The first three books in the series tackle the issue of Nazi-looted art. Real life events helped to inspire the story. I was reading on World War II when I uncovered a report about the Berlin Fire Brigade burning hundreds of books and paintings on the orders of the Nazis. The series begins loosely based around this account. Then just as the first book was published, which deals with the discovery of a missing Nazi-era painting in a present day English house, the Cornelius Gurlitt horde was uncovered in Germany. His father had been a Nazi art dealer and Gurlitt’s two homes were crammed full of paintings that the Nazis had considered degenerate and ordered sold or destroyed. So in a way, the lines between fiction and reality merged.

I’ve tried various methods, but I’m most productive in the mornings, so once everyone is off to work and school I write for two-three hours, 2-3 thousand words. I usually tackle marketing and admin tasks in the afternoon.

I always outline, chapter by chapter, but I do find that as I start writing, the story changes and evolves as the plot and subplots become clearer and I get to know the characters better.

I enjoy the research process most of all and have to stop myself getting too lost in other fascinating stories! Getting the first draft down is the hardest part. As Ernest Hemingway once said, “the first draft of anything is shit,” but once I’m there, I enjoy editing and crafting the story into a completed manuscript. At that point it goes to my editor, followed by three beta readers and finally to my proof reader to dot the i’s and cross the t’s.

World events were once again the inspiration behind my latest novel, Shadow of Doubt, a standalone which is best described as a financial thriller meets terrorist conspiracy. The polarising opinions in the United Kingdom surrounding Brexit and the subsequent discontent and instability gave me the idea for the novel, which asks the question, how well do we really know those around us?

I’m working on the sixth and final book in The Carlswick Mysteries series (although I originally said that the series was only going to be a trilogy!). This novel will bring the overall series arc to a conclusion, but some of the supporting characters may end up in their own books. We’ll see. I have a new mystery series planned for 2020, so that will come first.

Thanks for stopping by, SL!

Or buy her novels on Amazon. The first book in the series, The Carlswick Affair is also available on other retailers. Books 2-5 are enrolled in Amazon’s Kindle Unlimited program:

One thought on “Spotlight on mystery author SL Beaumont”