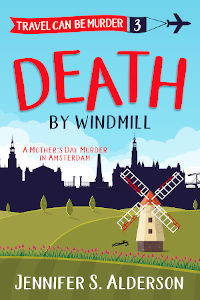 Welcome to the world, Death By Windmill: A Mother’s Murder in Amsterdam – Book Three of the Travel Can Be Murder Mystery Series!

Available now as eBook, in Kindle Unlimited, and as paperback on Amazon (eBook / paperback), Barnes and Noble, Book Depository, and other fine retailers.

The Travel Can Be Murder Cozy Mysteries are heartwarming stories about making friends, traveling, and celebrating new experiences. Join Lana as she leads tourists and readers to fascinating cities around the globe on intriguing adventures that, unfortunately for Lana, often turn deadly.