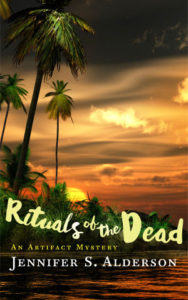 Rituals of the Dead: An Artifact Mystery is available as audiobook, paperback, and eBook from Audible US, Audible UK, Amazon COM, Amazon Worldwide, iBooks, Barnes and Noble, Waterstones, AbeBooks, or Book Depository.

A museum researcher must solve a decades-old murder before she becomes the killer’s next victim in this riveting dual timeline thriller set in Papua and the Netherlands.

Agats, Dutch New Guinea (Papua), 1961: While collecting Asmat artifacts for a New York museum, American anthropologist Nick Mayfield stumbles upon a smuggling ring organized by high-ranking members of the Dutch colonial government and the Catholic Church. Before he can alert the authorities, he vanishes in a mangrove swamp, never to be seen again.

Amsterdam, the Netherlands, 2018: While preparing for an exhibition of Asmat artifacts in a Dutch ethnographic museum, researcher Zelda Richardson finds Nick Mayfield’s journal in a long-forgotten crate. Before Zelda can finish reading the journal, her housemate is brutally murdered and ‘Give back what is not yours’ is scrawled on their living room wall.

Someone wants ancient history to stay that way—and believes murder is the surest way to keep the past buried.

Can she solve a sixty-year-old mystery before decades of deceit, greed, and retribution cost Zelda her life?

“I enjoyed every single line of the book, but my favourite parts were the flashbacks where the author offers a glimpse of a culture that I know very little about. The chapters set in Papua and New Guinea, the insights into the life and rituals of the Asmat people are, in my opinion, priceless.” – Dora Ilieva

Click here to read articles about the inspirations behind Rituals of the Dead. 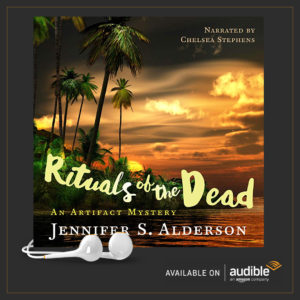 “Rituals of the Dead was given to me for an advance review and it just blew me away. I’ve read other books by Jennifer S. Alderson and am quite familiar with the quirky naivete of Zelda Richardson, the main character in Jennifer’s thrillers. This book sees Zelda in the centre of an anthropological mystery where her trusting, yet inquisitive nature, which makes her so endearing to the reader, could potentially spell the end of her life. The pace is fast without being hectic; the intrigue unfolds steadily, sustaining the reader’s interest to the very end.

I enjoyed every single line of the book, but my favourite parts were the flashbacks where the author offers a glimpse of a culture that I know very little about. The chapters set in Papua and New Guinea, the insights into the life and rituals of the Asmat people are, in my opinion, priceless.

I recommend the book to everybody who is interested not just in thrillers, but in cultural exploration as well. And if you want to witness the growth of the main character, I recommend that you read Down and Out in Kathmandu and The Lover’s Portrait.” – mystery author Dora Ilieva

“5 Stars – Magnificent. First, I’m a big fan of Alderson’s, and I’ve read her other books, The Lover’s Portrait: An Art Mystery, Down and Out in Kathmandu: Adventures in Backpacking, and Notes of a Naive Traveler: Nepal and Thailand. I was impressed by the first book and continued to love her work. When I heard about this one, Rituals of the Dead, I was already excited to read it. Now, with all that said, I need to dive right into this story. Even when I like or love an author’s work, I never have any preconceived notions about whether or not I will like the book or not. From chapter one, I was drawn in, very curious about Nick and wondering where he or his life would fall in to the life of Zelda. Alderson is a grand writer, and I like her writing style. Her research and knowledge are shown within the story, and her characters. I like Zelda, and always have, and this book brings more depth to her character, and sets her on a new mystery. I love that she’s human, and has to prevent herself from getting sick in the most presence of the most gruesome scenes of death and decay. Look forward to more. Simply magnificent, filled with intrigue and suspense, and a lot of wonder!” – Amy’s Bookshelf Reviews

“Thought-provoking: Everything I like in a mystery: Compelling characters, international settings, a mystery steeped in culture and history. Immersed in the debate currently taking place in the international art world, the theft of artifacts and demands by indigenous people for their return, the novel presents various sides of these issues for the reader to consider. All in all, this is a very satisfying mystery that left me with much to ruminate on. I have not read the other books in the series yet. This worked well as a standalone mystery, but I will definitely seek out and read the first two novels in the series.” – Amazon review

“It isn’t often one holds their breath while reading. As I finished the last chapter of Rituals of the Dead, all I could think was wow. Just wow.

In Book 3 of the Adventures of Zelda Richardson, Zelda is serving her internship at the Tropenmuseum. An upcoming display of artifacts from New Guinea leads to the discovery of skeletal remains and a diary from a wealthy explorer/collector who disappeared in the 1960’s.
History comes alive in this story as Zelda photographs the diary, unearthing a story of murder, greed, missionaries and artifacts. It is not a book one puts down easily. The characters are carefully crafted, engaging you from page one. Alderson takes you from past to present and back again seamlessly as you follow events Zelda has yet to unravel.

Book 2 in the series, The Lover’s Portrait, an award winning work, was my favourite read of 2017. Rituals of the Dead will undoubtedly be my favourite of 2018. It too is destined for well-deserved awards. Alderson’s work is entertaining, engaging, and educational, all that a reader could ask and more. Zelda matures and grows with each volume in the series.” – mystery author Janice J. Richardson

“A great read: If you’re looking for a mystery jam-packed with art and history, look no further. History comes alive as Alderson interweaves the past (the disappearance of an archeologist in 1962) with art student Zelda Richardson’s present assignment (a museum exhibition of bis poles). Being a lover of history, I enjoyed learning about past and present Dutch history while trying to solve two mysteries. Zelda is a fun and inquisitive sleuth! I look forward to going on more adventures with her.” – Amazon review

“Fascinating read: Jennifer Alderson’s first-hand experience and meticulous research make this well-written novel a fascinating read. Her attention to detail is bound to captivate anthropology fans. It also poses the moral question as to who owns the rights to ancient artifacts and how they should be treated. The protagonist, Zelda Richardson, is an engaging, ethical researcher that readers will easily applaud. My compliments to Jennifer Alderson for another enjoyable read.” – historical fiction author Pamela Allegretto

“Zelda Richardson is an adventurous heroine who loves to solve mysteries. She needs to succeed in her placement as an intern at the Tropenmuseum in Amsterdam but the work involves Asmat Bis poles from Papua New Guinea, totems made for the spirits of the dead, whose evil looking faces seem to be leading her into danger.

Seven crates have been discovered unopened for 50 years in the archive depot of Rotterdam’s Wereldmuseum. As Zelda and the more important staff from the museums observe, the crates are unpacked, revealing not just Bis poles, but also human remains of the head-hunting Asmat culture of what was then Dutch New Guinea. But the most intriguing discovery is the leather-bound journal of Nicholas Mayfield, a wealthy American anthropologist who went missing in 1962.

Interspersed with Zelda’s transcription of the journal and her investigations, are passages from 1962, where we discover the frustrations and difficulties Nicholas had experienced while trading in Dutch New Guinea, hindered rather than helped by experienced Dutch anthropologist, Albert Schenk. Albert is now Director of the Wereldmuseum and he seems to be a thoroughly unpleasant, arrogant individual.

Soon, Zelda is alarmed when two people close to her are murdered. She continues with her task of transcribing the journal and researching the background of the Bis poles for an imminent exhibition, but she keeps information close to her chest and, at times, is unwise in those she chooses to trust.

This exciting story is also an education about a culture of which I knew very little. The actions of colonial powers, the church and collectors of artefacts is called into questions but there is also our moral dilemma of whether to exhibit treasures from the past or return them to their source. But don’t let this put you off; you will be on the edge of your seat wondering if Zelda will take one risk too many as well as wishing to discover what actually happened to Nicholas Mayfield. A thoroughly good read.” – Lizanne Lloyd of Lost in a Good Book book blog

“Once again we join Zelda Richardson, who gave up her job as a multimedia developer at Microsoft, to relocate to Amsterdam and study art history. She currently has an internship at the Tropenmuseum where she is assisting in setting up a forthcoming exhibition of Bis Poles.

Bis Poles are artefacts that have been made on Papua New Guinea for generations by the Asmat people, carved during a bis ceremony, a party of many days honouring the life of the dead. The Asmat people believed that an adult couldn’t simply pass away, they put the blame on neighbouring communities and such a festival would end in a headhunting expedition (you can’t say you don’t learn anything!).

There are two timelines, 1962 and 2017. In the early 1960s the area was still under Dutch colonial rule. Many of the items collected and shipped to the Netherlands back then are hopefully to be included in the upcoming exhibition, showcasing the beauty and artistry of the carvings. As the assembled curatorial staff, including Zelda, unpacks crates of artefacts from the period, including human bones – supposedly all Asmat – a notebook falls out. It transpires that it belonged to Nick Mayfield, who was adventuring and collecting artefacts out in what was then Dutch New Guinea. His disappearance then becomes all the more sinister when a member of the present day team, Janna, the photographer, is murdered.

Father Terpstra was on missionary work in the area in the 1960s and it becomes apparent through photographic evidence that he and Nick were certainly acquainted. He too was a collector of some of the most astounding examples of the art. But it soon becomes apparent that he has something to hide… and he is not the only one.

The Anti-Colonial Brigade also make their views known, after all, the cultural history of the country had largely been stolen – sometimes by devious means. this is clearly a theme close to the author’s heart.

“This is an enjoyable and easy to read story of artefact collectors, with mystery and culture playing an important part.” – TripFiction