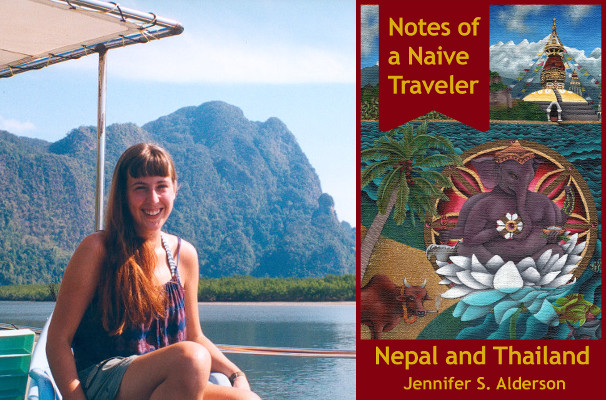 I thought I was so cool, handing over twenty-five Euros to a freshly washed junkie I’d met in a Red Light District coffeeshop, instead of one of the smellier ones lurking on the poorly-lit bridges crisscrossing the canals. As soon as he pocketed the cash, he scurried outside and charged down the street. I hurried after him, half-running to keep up. When he darted into a darkened alleyway, I froze and my guard went up. Was he robbing me, or worse? Before I could run, he’d already returned with a beat-up BMX mountain bike in one hand and a broken bike lock in the other. He passed me the handlebars and disappeared into the night.

Within minutes of my first cycling adventure on that crappy two-wheeler, I got knocked over by two huge Irish guys who’d unwittingly stepped into the bike lane. I’d only been in Amsterdam for a few days and was so fresh to the city I apologized to them.

When I later learned a true Dutchwoman would have responded with a string of expletives, I remember being furious with myself for not reacting ‘properly’.

It was the same when I lived in Darwin, Australia. Within a week, I was taking the piss out of the locals, loudly expressing my love of barbecue for lunch and dinner, and happily referring to the then Prime Minister by his derogatory nickname of ‘Johnny’. Locals often gave me funny looks; fellow expats simply nodded and asked for another charcoal-grilled sausage.

In Nepal, I scoffed at tourists using utensils instead of their right hand to eat, and laughed openly at those freaked out by the rather large insects and rodents scurrying about.

Whenever I move to a new country or city, I experience an almost primal urge to fit in. I can’t help but adopt local customs as my own, usually within days of arrival. I get edgy and irritated when people want to know what it’s like ‘back home’. I always have to bite my tongue, resisting the impulse to ask what they mean, this is home for now.

I’ve traveled through thirty countries and lived in three. For several years, I considered my backpack to be my best friend. I’ve obviously contracted a serious case of wanderlust. So why this desperate desire to assimilate?

If anything, my extensive travels have amplified this deep-seated need to belong, to feel as if I am a part of something – a stained glass class, volunteer organization, kayaking group, Frisbee team, or whatever tickled my fancy at the time. With hindsight I now realize my endeavors were a way of justifying my presence and claiming every new city as my own.

I did eventually buy a Dutch-style ‘grandma bike’ from a proper shop. After many months of searching, I found a decent place to live. I did most of my grocery shopping at the Albert Cuyp Market behind my apartment and spent my afternoons biking along the Amstel River or through the small fishing villages of Marken and Volendam. I did my best to befriend any and every Dutch person I came in regular contact with. And after a long year of intensive Dutch language classes, I was able to speak it fairly fluently. Despite the fierce competition, I was admitted into the (then Dutch language) Master’s degree program in Museum Studies at the University of Amsterdam. I was doing everything I could think of to root myself and set the foundation for my new life.

Yet even after living in Amsterdam for thirteen years – eight as a naturalized Dutch citizen complete with passport – I’m very aware that my Dutch is heavily accented, I don’t really get Amsterdammers’ cynical humor, and I don’t know most of the cultural icons of my husband’s childhood. My son will probably never live in – or really understand – the United States of America, the country I spent my formative years in, the land that shaped me.

Every time I think, now I’m one of them, a shop clerk or waitress will ask, “Where do you come from, South Africa? England? You have such a cute accent.” Or even more painful, “You’re Dutch is pretty good. My brother-in-law / co-worker / bus driver has lived here ten years longer than you and still can’t speak it.” Though it’s meant a compliment, remarks like these always deflate my ego and remind me that, no matter how perfect my accent or choice of words sounds to my ears, I’ll always be that foreigner who speaks Dutch with a funny accent.

The worst question by far, the one that really cuts deep and used to ruin my day, is: “When are you going back?” Back to where, I want to ask, but never do. Realistically, in a city full of expats working temporary contracts at a plethora of international corporations and foreign consulates, it is not a strange question to ask.

Yet when I do go back to the States to visit family, all I do is moan about having to drive everywhere, the fatty, salty foods on offer and the absurd selection of products available at any store you step into. Seriously people, does the world really need ten variations of chocolate chip mint ice cream?

I have to ask for directions wherever I go because my favorite cafes and shops closed or moved years ago, leaving me without any reference points. My open disapproval of typical American behavior and attitudes leaves my husband wondering why I lived in the good ‘ole US of A for so long. At the end of every trip, I leave feeling as if I’m the ultimate stranger in a strange land, yet this was once my home.

For a long time these questions about my accent and plans for returning to the States really bothered me. Then all at once, the aggravation disappeared. Or I should say, one day I finally accepted that this is how it was going to be for the rest of my life. My newfound homeland will never really accept me as a local, even though I see myself as one.

This realization has allowed me to connect with other expats, people I avoided like the plague when I first moved here. I no longer feel the need to ‘prove’ myself by only befriending those born here.

Because I am an outsider, I recognize and appreciate many of the wonderful facets Dutch society has to offer and value them perhaps more than locals do, those who have grown up with socialized health care, short work weeks, dirt-cheap child care, and state-subsidized culture institutions. Those who don’t know what it’s like to live in another society with a different set of values and priorities may never be able to truly appreciate their own.

Perhaps it is impossible to assimilate completely, to lose that outsider’s perspective. Frankly, I no longer want to. Being aware of the beauty inherent to the Dutch way of living makes being here that much more special. Why would I want to let that go?

Jennifer S. Alderson worked as a journalist and website developer in Seattle, Washington before trading her financial security for a backpack. After traveling extensively around Asia and Central America, she moved to Darwin, Australia, before finally settling in the Netherlands. There she earned degrees in art history and museum studies. Home is now Amsterdam, where she lives with her Dutch husband and young son.

Jennifer’s travels and experiences color and inform her internationally-oriented fiction. Her first novel, Down and Out in Kathmandu: A Backpacker Mystery, is a travel fiction adventure through Nepal and Thailand. The Lover’s Portrait: An Art Mystery, her second book, is a suspenseful ‘whodunit?’ which transports readers to wartime and present day Amsterdam.

Both books are part of an on-going stand-alone series following the adventures of traveler and culture lover, Zelda Richardson. The third installment in the series, Rituals of the Dead: An Artifact Mystery, will be released in early 2018. 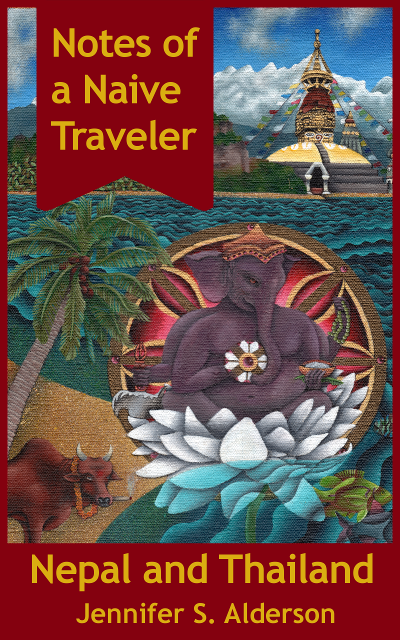 “I never thought I would have reason to say to someone, ‘sorry I’m late, it took longer to dismember the goat than originally planned.’”

I was twenty-six years old, had a well-paid job, fantastic apartment and large circle of friends. I had everything, except I didn’t. I couldn’t shake the feeling I was missing out on the experience of living.

Trek with me through the bamboo forests and terraced mountaintops of Eastern Nepal, take a wild river rafting ride in class IV waters, go on an elephant ride and encounter charging rhinoceros on jungle walks in Chitwan National Park, sea kayak the surreal waters of Krabi and snorkel in the Gulf of Thailand. Join me on some of the scariest bus rides you could imagine, explore beautiful and intriguing temples, experience religious rituals unknown to most Westerners, and visit mind-blowing places not mentioned in your typical travel guides.

This travelogue also provides insight into the experience of volunteering at a Nepali school and living with a traditional family during a long-term homestay, where religion and ritual still rule daily life.

A touch of self-discovery is inherent to this kind of journey, one spurred on by a young woman’s attempt to figure out what she wants to do with her life.

Notes of a Naive Traveler is a must-read for those interested in learning more about – or wishing to travel to – Nepal and Thailand. I hope it inspires you to see these amazing countries for yourself.

4 thoughts on “Claiming My Place in the World”