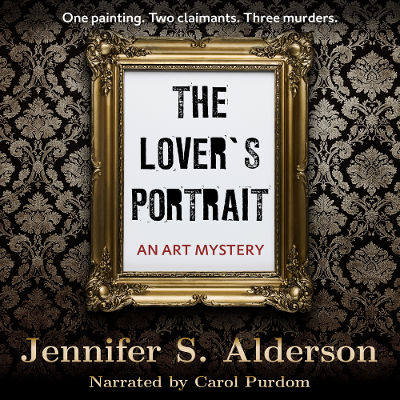 I am so excited to announce the release of my first audiobook!! The Lover’s Portrait: An Art Mystery is now available on Audible, iBooks and Amazon worldwide!

It’s already WhisperSync ready (meaning if you buy the Kindle version, you can pick up the audiobook for next to nothing). You can also listen to it for free when you sign up for an Audible membership.

You can listen to a sample of narrator Carol Purdom’s smooth voice on Amazon, Audible com, Audible co uk, and iBooks.

UPDATE OCTOBER 6: ‘I give this incredible book five stars!’

First review of The Lover’s Portrait audiobook is already in!!

Many thanks to Vicki Mejia-Gewe of FangirlNation for reviewing my new audiobook.

“This book gripped my interest through the entire course of listening to it. I really enjoyed the details of all the research into the provenance of art as well as all the periodic flashbacks to Amsterdam 1942, in the middle of the war. It made the realities of those living through the war become so much more vivid. The details of the characters’ natures came through interestingly as well.

Carol Purdom performs the audio edition of this book and helps to keep the book moving very quickly. She reads in a comfortable voice that enlivens the book and kept me listening nonstop to the book.

I was highly impressed by The Lover’s Portrait. I’m not interested in art in general, but that did not prevent me from being drawn to this book. Further, I only noticed halfway through that this is the second book in a series, but that wasn’t even apparent from the book. I give this incredible book five stars!”

The Lover’s Portrait: An Art Mystery

After studying for a year in the Netherlands, Zelda scores an internship at the prestigious Amsterdam Museum, where she works on an exhibition of paintings and sculptures once stolen by the Nazis, lying unclaimed in Dutch museum depots almost seventy years later.

When two women claim the same portrait of a young girl entitled Irises, Zelda is tasked with investigating the painting’s history and soon finds evidence that one of the two women must be lying about her past. Before she can figure out which one and why, Zelda learns about the Dutch art dealer’s concealed collection. And that Irises is the key to finding it.

Set in present day and wartime Amsterdam, this captivating mystery is not just about stolen paintings, but also the lives that were stolen.

The perfect novel for those who love art, history and mysteries.

This amateur sleuth mystery describes the plight of homosexuals and Jewish artists in Europe during World War II, as well as the complexities inherent to the restitution of artwork stolen by the Nazis in the 1930s and 1940s.

11 thoughts on “The Lover’s Portrait: An Art Mystery is an Audiobook”