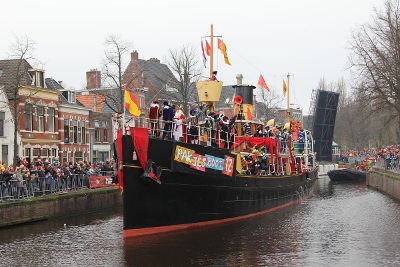 While my American friends and family are preparing for Thanksgiving, here in the Netherlands our ‘Christmas’ has already begun!

On Saturday November 18, Sinterklaas and his helpers (Pietjes) arrived by steamboat after a grueling trip across the rough seas. We know how difficult his week-long trip from Spain was because a special ‘Sinterklaasjournal’ – a fifteen minute news program for kids – is broadcast every night on national television, bringing us the highs and lows of his long and arduous journey.

After his arrival in the Netherlands, Sinterklaas travels all over the country, bringing joy and candy to the nation’s little ones. Parades are organized in every town, city and village.

When on land, Sinterklaas doesn’t walk around, but rides his horse Amerigo. He’s surrounded by Pietjes who throw candy – specifically gingerbread cookies called ‘pepernootjes’ – at the children as they go along. 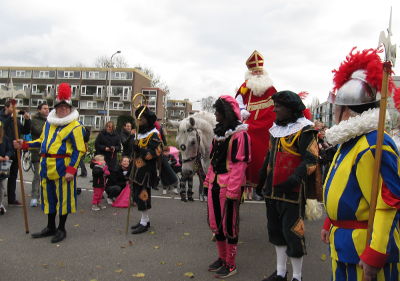 On the night of the 18th, kids put a shoe by the door or fireplace. If they are good, the Pietjes will slip inside and leave candy or small toys in their shoes. This is the official reason for the Pietjes blackened faces; they are going in and out of chimneys so much their faces get smeared with soot.

This continues until December 5, when Sinterklaas brings their bigger presents. He usually knocks on the door in the evening and – when the children try to get a glimpse of him – their presents magically appear by their shoe.

That night, Sinterklaas and his Pietjes sail back to Spain, leaving a country full of happy children behind.

As an American, I can’t help but see many similarities between Sinterklaas and Christmas. How about you? What do you celebrate in the winter? 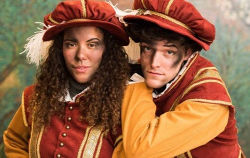 Side note: It is difficult to describe this Dutch tradition without mentioning the Pietjes. The first time I saw them in real life, I was in complete shock. Honestly, they still make me uncomfortable. Luckily, protest groups within the country (helped by the United Nations) are slowly swaying public opinion. There is a new style Pietje out there, though the ‘less soot’ look hasn’t caught on yet in most communities. I have high hopes that it will!