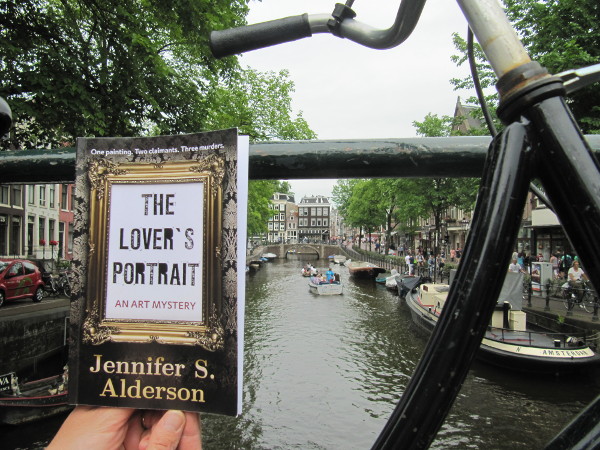 Amsterdam is the perfect setting for an art-related mystery, especially one in which the looting of artwork by the Nazis during World War Two plays a central role.

My second novel, The Lover’s Portrait: An Art Mystery, is about an American art history student who finds clues to the whereabouts of a collection of masterpieces hidden somewhere in Amsterdam, secreted away in 1942 by a homosexual art dealer who’d rather die than turn his collection over to his Nazi blackmailer.

I can safely say if I hadn’t moved to Amsterdam to study art history twelve years ago, I never would have written this novel. My life here as an expat and art history student, as well as the turbulent history of this amazing city and its many museums, directly inspired the storyline and several of the characters.

A Museum for Every Taste

Art history is what brought me to the Netherlands. Though I’d planned on completing a two-year degree and then moving back to the States, once I got here and started my studies I found it impossible to leave. I ended up earning a four-year master’s degree in art history and museum studies and had the privilege of working for some of the most prestigious museums in the world, all located in this fine city I now call home.

Amsterdam is an art and museum lover’s paradise. There is a saying here that Amsterdam has more museums than in any other city in the world. It might be true – there are more than seventy-five registered museums within the city limits, and a whopping four hundred if you count all of the galleries, private museums and cultural institutions. The Van Gogh Museum, Stedelijk Museum and Rijksmuseum are all situated on one relatively small grassy square in the heart of the city. Though most tourists come for the ‘Big Three’, there is literally a museum for everyone here: from the touristy marijuana, torture and sex museums, to prestigious photography, film and modern art museums, to well-preserved canal houses offering a peek into a bygone era, and specialty ones dedicated to hats, hand bags, eyeglasses, and pipes.

Looted Art and the Restitution Process

Like most European capitals, Amsterdam is drenched in World War Two relics, plaques, monuments, museums and memorials. It is a period that is still tangible for the older generation and its consequences are felt by many daily.

A novel about Nazi-looted artwork could have taken place in Brussels, London, or Paris. Several famous books about the war are set in these cities, also deeply marked by the Nazis’ atrocious actions and policies. However, I’ve tried to create a plot and characters unique to the Netherlands by including details about the Nazis’ strict rules regarding what Dutch artists could paint and gallery owners could display, their underhanded attempts to decimate the local Jewish community without the rest of the population noticing, and their sickening mental and physical abuse of homosexual men and women. I’ve also worked hard to provide a Dutch perspective on the often complex process of art restitution.

While I was studying art history and museology at the University of Amsterdam, the Dutch government organized an exhibition of unclaimed artwork entitled Looted, but from whom? . The exhibition was held in the Amsterdam’s Hollandsche Schouwburg, once a popular theatre the Nazis used as a ‘collection point’ for Dutch ‘undesirables’ before transporting to concentration camps abroad.

The restitution of Nazi-looted art was a hot topic during my time at the University of Amsterdam and the intricacies were often discussed by prominent guest speakers directly involved in the exhibition at the Hollandsche Schouwburg, or in such controversial cases as the ‘Goudstikker collection’, an extraordinarily discombobulated, multimillion-dollar claim on an extensive collection of masterpieces once owned by the preeminent Amsterdam art dealer, Jacques Goudstikker. That case alone has spawned two fascinating non-fiction novels.

At the same time, several important non-fiction books and documentaries about Dutch art dealers active during the war and their controversial connections with Nazi officers, were published and featured prominently on regional television shows and in the local media. Newspapers and magazines printed long articles explaining the details of several specific restitution cases, highlighting the complexities and legalities involved even when there is no doubt as to whom the last legal owner was.

During my internships, I watched first-hand as several museums conducted the same archival research Zelda’s team at the Amsterdam Museum does in my novel, while trying to locate the rightful owners to artwork laying unclaimed in Dutch depots for more than seventy years.

Amsterdam: a gorgeous and thriving metropolis 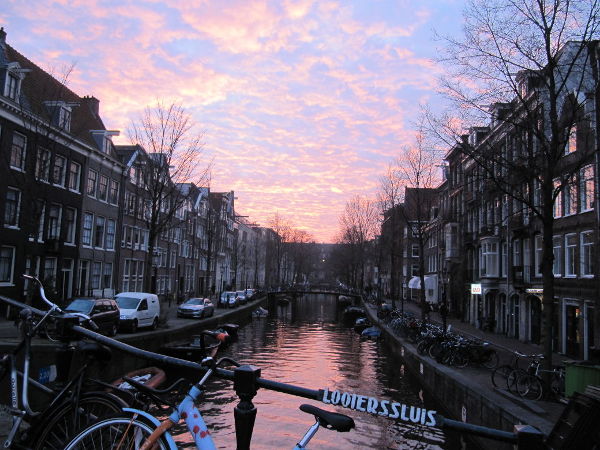 Anyway you cut it, Amsterdam is a gorgeous city. The centuries-old canal houses, boat-filled waterways, perfect puffy clouds and striking Northern light make it one of the most photogenic metropolises in the world, as attested to by the high number of films and television shows filmed here. During the summer, it’s impossible to ride through the center without having to take a detour because a film crew has taken over a street or city block. The city’s canals, many bicycles, tiny alleyways, maze-like streets, centuries-old homes, distinctive churches, and hidden squares lend itself as the setting for many a book as well.

There is a constant flux of tourists here – from day trippers to backpacking loungers – looking to get stoned, take a bike tour, pop into a church, visit an art museum, the Anne Frank House and the Heineken Brewery, often in that order.

Yet the center is also alive and bustling with rich locals and expats who reside in the monumental canal houses, as well as the lucky tenants who scored a rent-controlled apartment, as part of the government’s social housing program. Parents teach their kids to ride bikes on the narrow, brick-paved streets, even allowing them to play soccer or skip rope in-between bikes, scooters, and cars racing by. 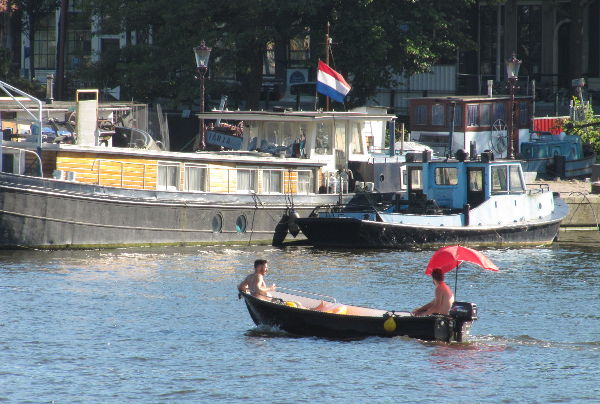 This mix of tourist, expat and locals all jammed into a ringed city center you can bike across in a half-hour, makes for an interesting mix of stories and is a constant source of inspiration for me as a writer. In fact, several of the characters in The Lover’s Portrait and my current work-in-progress are reminiscent of people I’ve encountered here.

This city continues to spark new ideas. My next novel, Rituals of the Dead, is another art-related mystery about Asmat bis poles, missionaries and anthropologists. It was conceived during my time as a collection researcher at the Tropenmuseum in Amsterdam East and the Netherlands’ colonial history played an important role in the plot’s development.

My current work in progress examines art smuggling, theft, and the Dutch underworld’s ties to the Italian mafia. It’s been quite a fun book to research!

I know this city – its museums, culture, architecture, colorful locals and even public transportation – will remain my creative muse for as long as I live here.

I am extremely grateful to artist and author Rosa Fedele for featuring an earlier version of this article on her blog!

2 thoughts on “Amsterdam: the Perfect Setting for an Art Mystery”