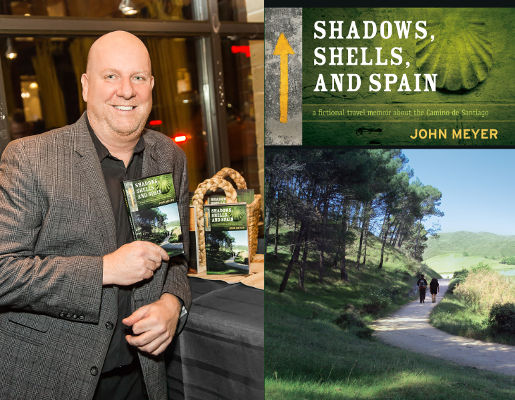 Today I have author and television writer John Meyer as my guest. Read on to learn how getting robbed in Rome spawned his writing career, what it is like working for Entertainment Tonight, and the importance of getting the setting right.

Please tell me a little bit about yourself, your books, and writing career.

Now the book career started after I was robbed in Rome! Leaving my cramped hostel for a better hotel down the street, a thief somehow—magically—unzipped the pocket of my backpack where I had briefly stored my money belt. When I reached my hotel, two minutes later, the backpack zipper was wide open and the money belt was missing. My money, my credit card, my debit card, my plane ticket, and my passport were all gone!

Obviously, my trip was ruined and I returned home. However, as the weeks and months rolled by, I realized that my “stranger in a strange land” robbery story would make a great start of a book. I was looking for something more substantial to write beyond my regular TV job and I wanted it to combine my love for writing and travel. So I returned to Italy one year later and spent six glorious weeks researching Rome, the Amalfi Coast, and Siena. Then after a few starts and stops, three years later, I completed my first draft of my first book, Bullets, Butterflies, and Italy.

Now my author life perfectly complements my TV writer life. During the day, I have to write quickly and accurately about pop culture. But at night and on the weekends, I can create my own stories and write to my heart’s content in a much longer art form.

Well, Australia and… New Zealand and… the South Pacific. And because I’m a poor flier, I’d probably have to break up the agonizing flight time into manageable sections. Perhaps Toronto to Los Angeles to Hawaii to Fiji to Australia. Then return through the Cook Islands or Tahiti or Samoa or Easter Island…

It’s the distance, the exoticism, the weather, the people… it’s my great white whale. The daunting effort to get there is holding me back. And the fact that it’s not a trip to be taken lightly. It’s a month, maybe two, perhaps three to make it worthwhile. And the only thing that is stopping me is the required and substantial amount of vacation time (and maybe money…). 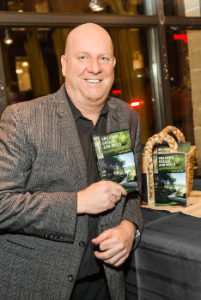 So I wanted to combine my love of writing with my love of traveling, and, naturally, I first explored writing non-fiction travel books. However, they never quite satisfied me. They were always (simple) stories about a man or a woman climbing a mountain, or walking through a jungle, or building a country home in a place like Tuscany. While those are all valid pursuits, I found that they often lacked much human drama or interesting characters. (Not always true but I think you get my point…) The narrator either accomplished their task—or they didn’t. That’s it.

So I wanted to utilize my favorite elements of a travel book and add more or a personal adventure—even a fictional one. That’s when I came up with my concept for something I called a fictional travel memoir. The fun part was that I would travel to these foreign countries and then use the characters I met, the experiences I had, and the challenges I faced to create a fictional story far greater than my own journey.

So the immediate attraction for my newly chosen genre was that I get to extensively travel. I simply can’t write my books without first participating in the same events that my main character does. In the first book, I spent two weeks in Siena, Italy to witness their Palio festival. In my second book, I ran with the bulls in Pamplona, Spain in order to understand its thrill and ultimate danger. And in my third book, I had to walk across Spain in order to write about the physically exhausting but mind-altering Spanish Camino.

Oh, the main character in all of my books is always me to some degree. In Shadows, Shells, and Spain, it’s definitely Jamie Draper. Since I always write in the first person I want to share my thoughts and conclusions of what I saw and experienced in my travels with my readers.

It’s also important for me that the story takes place in real time. So because my personal Camino trip took 22 days, Jamie’s trip now must take 22 days. The story may be fictional but the traveling part is as authentic as possible. So those descriptive sections always reflect my truth. And if you walked with me (or Jamie) maybe your experiences and conclusions would be similar—or maybe entirely different since that’s also a component of the wonderful mystery of travel. No two people ever have the exact same trip!

Again, this recognition and acknowledgment of character only holds true for the traveling sections… and not the main story. Jamie Draper is not me! 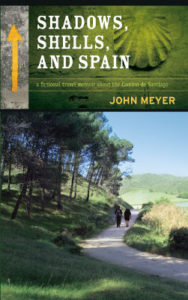 First of all, most of my readers are travelers, or at least, people who have a desire to travel and explore themselves while they wander the world. And, as I’ve already explained, I try to make the traveling sections as accurate as possible. Or, at least, reflect what happened to me when I visited these locations.

Now before I outlined Shadows, Shells, and Spain, I read a few other Camino books as well. They were largely personal. They were (probably) true accounts of the narrator’s journey. Sometimes they were even spiritual. But I wanted to create something different. A fun, sometimes heartbreaking, sometimes humorous, love story—that reflected my own grueling journey on the Camino path that was recognizable to my own personal challenges with snorers, flies, allergies, and twisted ankles.  I even mention my intention on the back cover: “First, get a Camino guidebook. Then get the real story behind the majestic beauty and awesome power of the Camino de Santiago…”

So all the other characters in Shadows, Shells, and Spain are based on real people whom I met on the Camino trail—especially the more colorful personalities. It was funny how many people wanted to be in the book. “You’re writing a book about the Camino? Can I be in it?” “Sure, do something outrageous.” “Why?” “You think I’m going to write about a nice guy who says and does nice things all the time? Where’s the drama in that? You want to get in my book? You have to be outrageous.” Now while that tactic didn’t exactly work, my fellow pilgrims certainly opened up their hearts and told me a lot of interesting details about their lives.

Basically, I write weekends and nights after my 9-5 job writing for Entertainment Tonight Canada. And I outline everything! I know my beginning and my ending and everything in between. And I use the principles taught in John Truby’s The Anatomy of Story: 22 Steps to Becoming a Master Storyteller. It is, by far, the most comprehensive writing course I have ever taken. Now while most of his concepts are for the movie industry, his story principles can be applied to any long-form medium. You still need an inciting incident, a flawed hero, allies to help the hero, a main opponent, a moral decline of the hero, and a big battle at the end of the story that would later refine the hero into becoming a better person. (Obviously, a lot more goes into a novel, but you get the idea…) And while the story evolves and I discover things along the way (especially how characters act and react to each other), the basic narrative remains intact… especially the ending.

I think about my ending much more than my beginning. The ending is often the first thing I write. Even if it’s only a paragraph or a few lines of dialogue, it sits there the entire time while I write everything else. Then when I reach that ending, I only have to tweak it. If I don’t have my ending, I don’t start writing!

After my 22 day Camino walk across Spain, I wasn’t ready to give up the nomadic life! Before my trip, I had moved out of my downtown condo, sold much of my furniture, and had placed all my remaining belongings into a large storage unit. I then delayed any future decision-making and assumed I would look for a new place to live upon my return.

But that didn’t happen…

After living for a month with everything I needed on my back, the last thing I wanted to do was buy new furniture and set up shop again. So I continued my nomadic life inside Toronto… for 2.5 more years! I just signed up for Airbnb rentals: a month here, a week there, a long weekend over here. Over the course of two years, I stayed in over 30 houses, apartments, condos, and basement suites! I only succumbed to living in an apartment again because I needed a “permanent” residence for my publishing address. So I made sure I lived close enough to nature, or at least, a big city park…

Thanks for stopping by, John!

Connect with John Meyer via his website, Goodreads, Twitter, or Facebook. You can buy his books on Amazon com, Amazon ca, Kobo, Apple, and Barnes & Noble.

2 thoughts on “Spotlight on author and television writer John Meyer”