Here are excerpts and links to guest posts and featured articles I’ve written for book blogs, websites and online magazines. Click on the link to read it in its entirety:

Beverage of choice: Koffee verkeerd – the Dutch equivalent of a latte.

10. The Beach by Alex Garland – adventure/crime fiction – This classic is the reason I began writing. Not that I thought I could do better, or anything like that! It was the first fiction story I had read that combined crime, mystery, young adult angst, backpacking, wanderlust and adventure so seamlessly.

Read the entire list on The Book Addict’s Blog.

What is That Book About: Author Spotlight, September 6, 2018

Were there any real life inspirations behind your writing?

All of my books are directly inspired by past travels, my background in journalism and ICT, as well as my strong interest in culture and art. After a short career as journalist and computer geek in Seattle, Washington, I spent several years exploring countries in Oceania, Central America and Asia. After living in Darwin, Australia for almost two years while studying cultural anthropology and aboriginal art, I moved to Amsterdam, the Netherlands to study European art history. During my studies and journeys, I have come across so many incredible and intriguing stories that I could write a hundred art-related travel mysteries and not have to repeat myself.

Read the rest of the interview on What Is That Book About.

Is there a particular part of this story that you feel is more resonating in the audiobook performance than in the book format?

In parts of both The Lover’s Portrait and Rituals of the Dead, the suspense seems to be more intense in the audio version than the print version. When listening to The Lover’s Portraitfor the first time, I was happily surprised to hear how well my descriptions of Amsterdam work when read aloud. I had the same burst of joy when hearing how my descriptions of Dutch New Guinea (now Papua) sounded in Rituals of the Dead.

I have heard other authors say that they ‘hear voices in their head’ and that is how they write their books: the characters are telling their stories. Not being a writer myself, that concept has always intrigued me. When some people hear voices, we get them medical attention, others end up becoming writers. Does this happen to you? How do you come up with your stories?

“How funny! I have been asked this question before, yet didn’t dare give an honest answer for fear of being committed….
It does happen that a character I’ve created will complain about a word choice or protest an action as ‘out of character’. Which frankly, always feels strange because it really does seem as if someone is talking to you – from inside your head…
The settings of my novel are also extremely important to me, probably because I am an avid traveler. It is a joy to write about countries I have visited and re-live my own experiences. It also helps keep my insatiable wanderlust in check! While reading my books, I want readers to gain insight into a place or culture they don’t know much about, or revisit a country they’ve traveled to and recognize it….”

“Travel with Jennifer S. Alderson to Amsterdam and find out what has happened to some missing Dutch masterpieces.  Jennifer asked me to hide the paintings in the Handbag Gallery, but if you read the novel then the secrets will be revealed.  A pesky amateur sleuth will guide you through the mystery.  Sit back in your armchair, turn back the clock to World War Two. Time to immerse yourself in a narrative, inspired by detailed historical research, and meet the author’s favourite characters…”

Read the entire blog post extract from The Lover’s Portrait on Jessie’s blog.

The Colonial origins of many ethnographic museums helped to inspire Rituals of the Dead: An Artifact Mystery.

“Many African ritual masks, ancestor statues, and painted shields in museums have a less-than-ethical provenance. My blog guest this week, historical fiction author Jennifer S. Alderson, discusses this provenance and restitution of ethnic artifacts to their countries of origin…”

“I am so excited to announce the impending release of my third novel, Rituals of the Dead: An Artifact Mystery. Set in Amsterdam and Papua New Guinea, it combines anthropology, art, and history into one thrilling adventure. It’s been a joy to write because the subject matter is near and dear to my heart…

The exhibition central to my artifact mystery is based on an actual exhibition of bis poles entitled Bis poles: Sculptures of the Rainforest. They are ancestor objects akin to Native American totem poles. They were created to honor dead ancestors during a six-week long ‘bis’ or headhunting ceremony.”

Read my article on Lucia N. Davis’s blog, Asmat Bis Poles and Rituals of the Dead.

“I am fully aware the meat so nicely packaged up in grocery stores comes from living animals that have been slaughtered. I am one of those people who doesn’t mind, as long as I don’t have to see it happen.

In Nepal, ‘fresh meat’ means recently butchered. While volunteering as an English teacher for three months in Kathmandu, I witness several meals being prepared; their heads cut off with a single swipe of a khukuri before their carcasses were cut up, usually on our rooftop terrace. I have even eaten a cake made of congealed fresh goat’s blood, a delicacy prepared for my Nepali father’s birthday. How could I refuse?”

Read my article on Andrew Cairns’ blog, ‘Let There Be Blood!’

“In my novel The Lover’s Portrait: An Art Mystery, the character Lex Wederstein is a young, talented Jewish artist whose career is cut short by the Nazis occupation of the Netherlands. Lex is based on a real person, the Dutch Jewish painter Moos Cohen. Because I am an American writing about sensitive topics in Dutch history, I didn’t dare make up any historical events or characters yet based them all on actual events and people I learned about while conducting archival research for the novel…”

“Before moving to Amsterdam, I knew very little about the restitution of artwork stolen by the Nazis during World War Two, a topic that plays a central role in my novel, The Lover’s Portrait: An Art Mystery. Sure, I’d read about controversial cases in newspapers and wondered why museums didn’t hand over the artwork immediately when legitimate claimants appeared on the scene, but also why it took the relative of the legal owner so long to submit a claim.”

“It was crucial for the plot that this art dealer character not be Jewish but did need to be considered a ‘dissident’ or threat to the Nazi regime for another reason. I went to the Amsterdam City Archives with an open mind and list of questions.

I’d thought up all sorts of plot twists which involved other groups targeted by Hitler’s troops—Romas, communists, Jehovah’s Witnesses, political dissidents and homosexuals—and decided to see what my adopted hometown’s archives could tell me about how they were affected by the war. The documents I found relating to the treatment of homosexuals were the least known, and therefore most interesting, to me.”

“My next guest for Mystery Thriller Week, Jennifer S. Alderson, was a writer by profession before she became a novelist.​

Read my Guest Blog Post on author Catherine Dilts Blog about The Mysteries of Indy Publishing.

Why Amsterdam is the Perfect Setting for an Art Mystery: MTW Feature on Artist and Author Rosa Fedele’s newsletter and website, January 22, 2017

“Amsterdam is the perfect setting for an art-related mystery, especially one in which the looting of artwork by the Nazis during World War Two plays a central role. My second novel, The Lover’s Portrait: An Art Mystery is about an American art history student who finds clues to the whereabouts of a collection of masterpieces hidden somewhere in Amsterdam, secreted away in 1942 by a homosexual art dealer who’d rather die than turn his collection over to his Nazi blackmailer.

I can safely say if I hadn’t moved to Amsterdam to study art history twelve years ago, I never would have written this novel. My life here as an expat and art history student, as well as the turbulent history of this amazing city and its many museums, directly inspired the storyline and several of the characters.”

Read my Article on artist and author Rosa Fedele’s blog about why ‘Amsterdam is the Perfect Setting for an Art Mystery’.

“Let me make this clear from the start: I love the smell and feel of archival documents, those yellowing bits of paper and crumbling photographs that rustle ever so slightly when extracted from their manila envelopes.

There’s something magical about scouring through meters of racks, drawers and file folders until you find an interesting or odd snippet of information recorded long ago which helps a character or story truly come to life.”

Read my Article on Women Writers, Women’s Books about ‘How Archival Research Added Texture to my Novel’ (December 23, 3016), wherein I describe my research process while writing The Lover’s Portrait: An Art Mystery.

How Archival Research Added Texture to My Novel: Mysteristas, September 23, 2016

“While working out the storyline for my second novel, The Lover’s Portrait, I realized early on that the restitution of looted artwork and the treatment of Jewish citizens in the 1930s and 1940s, were going to be central to the plot.

To ensure that any potentially controversial aspects of my art mystery were accurately honestly and accurately described, extensive archival research would be essential. What I didn’t expect, is that this same research would add much needed texture and depth to my story, infuse it with universal themes and – according to all the reviewers so far – be what sets it apart.”

Read my Guest Blog Post on Mysteristas about Texture and Fiction, wherein I describe how archival research enriched my novel, The Lover’s Portrait: An Art Mystery. 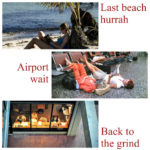 “When I read on the beach, the story’s got to be light and quirky or it goes back in my tote bag. The Good Thief’s Guide to Paris (2009), by Chris Ewan—or really any of the other four books in Ewan’s popular series of mysteries about a globetrotting thief-for-hire—fits the bill perfectly.”

Other recommendations include: John Berendt’s The City of Falling Angels, Pamela Allegretto’s Bridge of Sighs and Dreams, and Annika Milisic-Stanley’s The Disobedient Wife.

Read why I recommend these titles in The Displaced Nation’s September 1, 2016 BOOKLUST, WANDERLUST: ‘Expat creatives recommend books for the (not quite) end of summer’

“Last year, while researching my third novel, I was lucky enough to come across Carl Hoffman’s Savage Harvest: A Tale of Cannibals, Colonialism, and Michael Rockefeller’s Tragic Quest for Primitive Art (2014) It is simply one of the best nonfiction travel adventure stories I have read in a very long time. An award-winning American journalist, Hoffman recounts his fascinating journey to Papua New Guinea, where he retraces the last art-collecting expedition made by anthropologist Michael Rockefeller. He juxtaposes his own travels through the Asmat region with a fictive reconstruction of Rockefeller’s final days before his mysterious disappearance, based on extensive archival research and new eyewitness accounts. He effortlessly combines mystery, adventure, personal self-discovery and colonial history into one captivating novel.”

Other recommendations include: Chris Pavone’s The Travelers and Larry Witham’s Gallery Pieces: An Art Mystery.