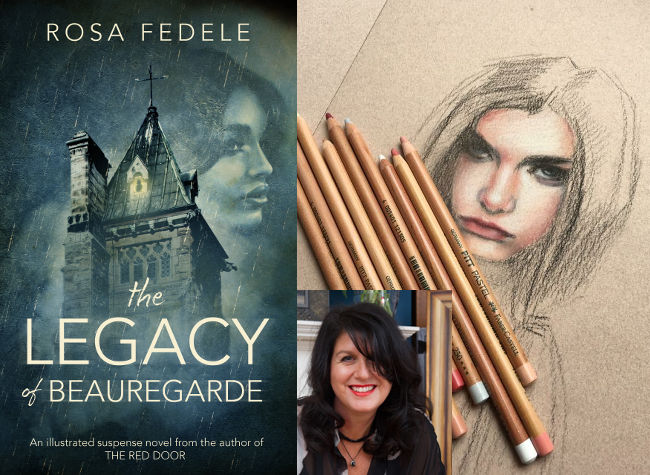 It is an absolute pleasure to welcome the very talented artist and mystery author Rosa Fedele to my blog! Today is the release day of her second novel, The Legacy of Beauregarde, a fascinating murder mystery set Sydney, Australia in the 1990s. I loved her first novel, The Red Door, and can’t wait to get started reading this one.

What makes both books even more special is that they are illustrated. You can check out (and even buy) illustrations from the book on Redbubble.

Without further ado, take it away, Rosa!

Hi Jennifer. So chuffed to join you and your family of book- and (I hope!) art-lovers!

I’m an Aussie artist and actually fairly new at novel-writing. Funnily enough, the initial reaction I encountered at the announcement of my first novel was: “Why ever did you decide to write a book?” The question was usually (and is even now) accompanied by the scratching of heads, and incredulous or uncomprehending looks.

But I don’t think it was such a leap from creating pictures with a pencil or brush, to conveying images with words.

“But, is this something you’ve always wanted to do?” they persist.

Quite simply, yes. I have always known I would write and illustrate my own books; it was a natural progression. As a child, I grew up on a rich diet of illustrated stories – the works of C.S. Lewis, Tolkien, Beverley Nichols, Hauff’s Fairy Tales, E.C. Pedley’s Dot and The Kangaroo.

And now I’m so excited to bring my new illustrated suspense, THE LEGACY OF BEAUREGARDE, into the world on 10th July!

This novel is a decadent and eccentric tableau of theatre and treachery, old secrets and betrayals; exploring friendship, guilt and obsession, and slipping between characters to gradually reveal a century-old mystery.

It’s the second in my series of illustrated novels, again taking place in Australia of the past: this time the year is 1990 and we are in a leafy and delicious part of Sydney named Hunters Hill.

As I wrote the story, the characters emerged in my mind and I’d make a sketch or paint a picture to illustrate exactly what my main protagonista looked like or how I imagined the front door of The Peach Pit to be. I always invite my social media followers along on the journey, to watch the illustrations evolve from inception through to the final image. Some of these paintings were discarded, some filed away … and only sixteen made the final cut.

Here’s one that got scrapped: 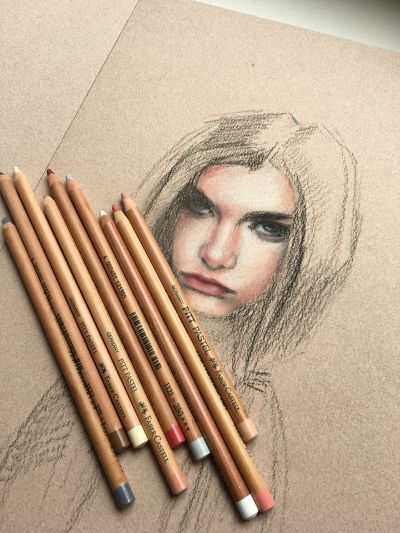 Each of my books is built around an iconic Sydney building. The Seminary was inspired by an old Abbey; as in the book it is a majestic estate previously owned by the Catholic Church. Here’s how it looked circa 1880:

And here’s my main lady, Marcela: a beautiful, empowered, tenacious, yet troubled, soul. 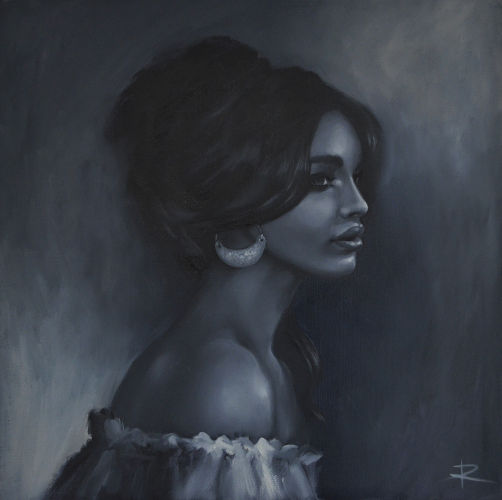 Marcela and her family have lived beside The Seminary for four generations. After twenty years of abandonment, the Gothic Revival manor, steeped in both fanciful legend and rumours of haunting, is in dire need of heavy renovations.

The building is purchased by a wealthy couple with deep personal issues, and the wife is filled with grand ideas of how to remodel it. Not only that, she has arranged to have the renovation followed by a television crew (much like an Australian version of UK’s Grand Designs or America’s HGTV).

And that’s when Marcela’s problems begin.

Here’s a passage from the book, wherein Marcela tells a story of The Seminary and the great storm of 1899:

“‘1899 was a terrible year for the residents of Hunters Hill: beginning with a two-month drought which hit farmers and fruit-growers hard. Hot winds blew in from the desert, and bushfires struck. For weeks after, the town was shrouded in a layer of ash and red dust; gritty powder on every surface, clouding every window and crusting the sills, the fine cinereal dust coating every jug of fresh morning milk and gritting the corner of every eye.

‘Then, a boatload of patients from the Lunatic Asylum at Tarban Creek escaped, swam to Hunters Hill and terrorised the village. Mayor Joubert advised the frightened townsfolk to barricade their doors and protect their wives and children but, despite the heightened security, the Postmaster’s daughter was found one morning, dead and disfigured, on the steps of the Post Office, right next to the Wharf. The girl’s death sent shockwaves throughout the village, and many of the wealthier residents, including Justice Manning and the Camberwells, fled the peninsula to their country retreats in Bowral and Wentworth Falls. Even the family Jeanneau closed up their home and sailed on the next ship back to Europe. The Postmaster’s daughter had scarcely been buried when fierce storms hit the eastern seaboard and flooded the entire township, torrential rains collecting the ochre dust and forming churning rivers of red, down the cobbled streets and towards the harbour. Massive landslides occurred along the coastline, the ships slipped at Mort’s Dock sustaining great damage and many homes were washed away. The only positive outcome of the inundation was that the escaped lunatics were eventually found, concealed in a coastal cave, rounded up and shot. And it was during these storms the new priest appeared – a Frenchman who they said hailed from the Abbey at Vitreux – and moved into the Tower.

‘Nobody saw him enter; one day the Tower sat empty, the next day he had taken up residence in the topmost room. “He can’t speak English,” one of the brothers hinted. Another one laughed and told him he doesn’t speak at all. “He’s a Trappist, a member of the order who believes speech disturbs a disciple’s quietude and receptivity, strict observers of contemplative silence.” Cloaked in pale grey broadcloth and silent as death, they sometimes saw him staring out at them from the west window. “Why is he here?” asked one. “He seems awfully young,” remarked another. But the Rector refused to divulge any more information about the new tenant, his meals were passed through the door twice a day and, after the initial excitement, the denizens of The Seminary stopped thinking about him altogether … until some months later, when the Grey Friar’s body was found smashed and broken in the courtyard below.’

Claudia sat motionless, her mouth open. ‘Does anyone know why?’ she asked. The apple, unfinished and starting to brown, was cupped in her hand.

‘Beatriz suggested that he got expelled from his people in France and sent out here as punishment, that his shame was so great he flung himself from the window. That was what she told me and what everyone was led to believe …’

A cloud passed over, darkening the room. Marcela frowned. It felt as though the Tower itself was objecting to her tale and had thrown a disapproving shadow across the lane.

‘… but my mother had a different story.’

She stopped talking then and gazed out at the old Red Bloodwood, swishing and swaying with the wind.”

And here’s a bit of book trivia:

One of my characters, Stu, is a tradie working on the site of The Seminary. He’s also a finalist in a national music competition, similar to Idol or X Factor. The song he sings “Gave Up On Me” was composed by Aussie musician and actor, Domenica. 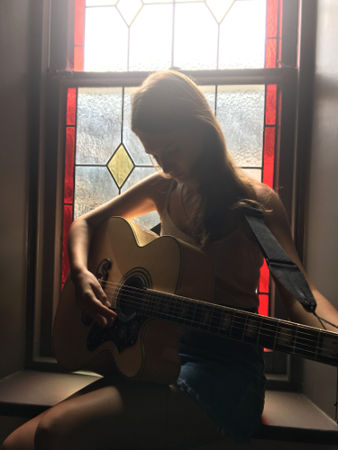 So, as they read the book, readers can listen to the tune here! Cool, hey?

Thanks so much, Jennifer, for having me along and allowing me to wantonly inundate your blog with art, architecture and music. I hope you all enjoy reading THE LEGACY OF BEAUREGARDE as much as I loved writing it and, of course, creating the illustrations. Happy reading!

It was truly my pleasure, Rosa! I can’t wait for my paperback copy to arrive. Best of luck to you today!!

You can buy your copy of The Legacy of Beauregarde now on Amazon US, Amazon Australia, Amazon UK and Amazon Canada.

More About the Author

Graduate of the prestigious Julian Ashton Art School and finalist in many prizes including the 2017 Portia Geach Memorial Art Award, Rosa Fedele has exhibited at NSW Parliament House and Parliament House Canberra, as well as numerous galleries and exhibitions in Australia and worldwide. Rosa has studied at the NSW Writers Centre and is a regular contributor to arts magazines where she prepares articles and comprehensive tutorials.

One thought on “Spotlight on artist and mystery author Rosa Fedele”