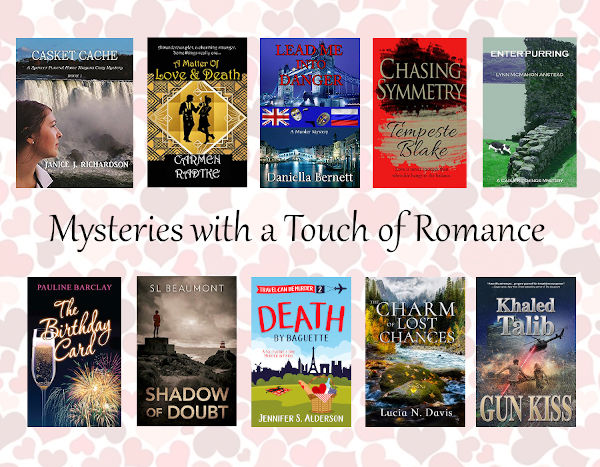 From the first blushes of new love to couples reconnecting, these mysteries, thrillers, and cozies are perfect February reads!

Death by Baguette: A Valentine’s Day Murder in Paris

Available as eBook, paperback, and in Kindle Unlimited.

While honeymooning on a Baltic cruise, Duncan and Carly meet the mysterious Kateryna who appeals to them for help.

Disembarking the ship to tour Scotland with the rest of the family, they don’t expect to see her again. When Carly finds her dying on the banks of Loch Ness, they realise that Kateryna was not whom she pretended to be.

Doreen Wilkinson, a woman in her mid-thirties and single mother to a seventeen-year-old daughter, (going on thirty), can never imagine life will be anything other than the daily slog of trying to keep body and soul together.

Running late for work, she hurries out of her flat and sees a balloon bobbing on a thin ribbon tied to her neighbour’s door handle. Realising it must be the old boy’s birthday she decides to get him a birthday card at the same time as she picks up a packet of cigarettes from the corner shop.

Whilst the cigarettes will go up in smoke, the purchase of the birthday card will change her life forever.

The Birthday Card is a feel good, light-hearted read that will have you laughing out loud.

How well do you know those closest to you?

Jessica McDonald appears to have it all: a successful London banking career, a happy marriage, and good friends. Then a terrorist bombing rocks London in the wake of the Brexit referendum.

She narrowly escapes injury and tends to others wounded at the scene, too shocked to process what has happened. Lacking support from her husband in the aftermath, she turns to her new work colleague Will Johnston for comfort, setting her personal and professional lives on a collision course with unforeseen and explosive consequences.

Jessica barely has time to recover before another tragedy hits: her beloved father suddenly dies of a heart attack in Edinburgh, and she rushes to her mother’s side to comfort her.

Waiting for Jessica in her father’s personal effects are instructions in code and the key to a safety deposit box. As she follows the clues her father left behind, Jessica uncovers secrets that will upend the foundations of her life—and put her in grave danger.

Forced from her home and job, Jessica flees to the Scottish coast where she tries to piece together a terrifying conspiracy that has personal and global implications.

Can she stop events that could topple the political establishment of the country? Or will terror succeed?

A journalist, a jewel thief, and a Russian spy…when their paths cross, it’s murder.

Journalist Emmeline Kirby hasn’t laid eyes on her former lover Gregory Longdon, a jewel thief, in two years. But she literally tumbles into his arms, after she witnesses two men attempt to murder her friend and fellow journalist, Charles Latimer, in Venice.

When Charles is ultimately killed, Emmeline is determined to bring his murderer to justice. But as she and Gregory delve deeper, they become ensnared in a hunt for a Russian spy in the British Foreign Office, who has his sights set on keeping his identity a secret at all costs—as Charles found out too late.

Someone had been trying for the perfect shade of red …

A Matter of Love and Death

She decides to put it behind her, but it’s not easy. Luckily there is the charming, slightly dangerous night club owner Jack. Jack’s no angel – six pm prohibition is in force, and what’s a nightclub without champagne? But when Frances’ earlier fears resurface, she knows that he’s the person to confide in.

Frances and Jack’s hunt for the truth puts them in grave danger, and soon enough Frances will learn that some things are a matter of love and death…

When the Deringer pistol that shot Abraham Lincoln is stolen and ends up in the hands of a Russian military general, covert agent Blake Deco is tasked by the FBI to head to the Balkans to recover the historical weapon. Meanwhile, the United States media is abuzz with news of the mysterious disappearance of Hollywood movie star, Goldie St. Helen.

After Blake’s return from overseas, he receives a tip from a Mexican friend that a drug lord, obsessed with the beautiful actress, is holding her captive in Tijuana. With the help of a reluctant army friend, Blake mounts a daring rescue. What he doesn’t expect is to have feelings for Goldie—or that a killer is hunting them.