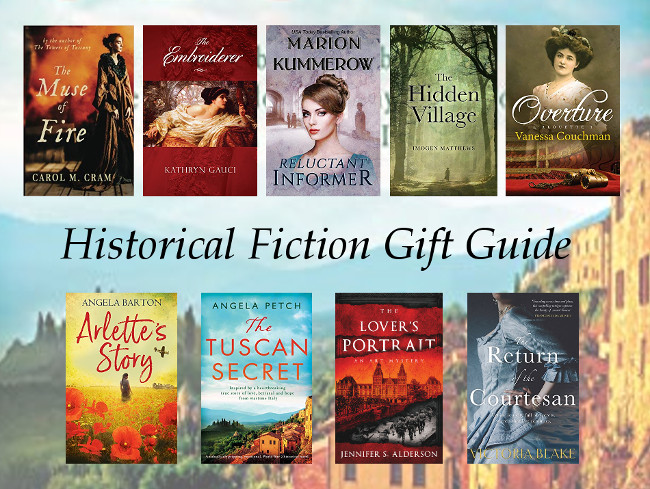 These fascinating tales introduce you to the world of singers, theater makers, artists, and tapestry weavers in bygone eras, as well as those of ordinary citizens caught up in the horrors of WWII in the Netherlands, France, Germany, and Italy.

Most of these titles are also available as audiobook, paperback, and in Kindle Unlimited. Don’t forget – books make great gifts!

When a Dutch art dealer hides the stock from his gallery – rather than turn it over to his Nazi blackmailer – he pays with his life, leaving a treasure trove of modern masterpieces buried somewhere in Amsterdam, presumably lost forever. That is, until American art history student Zelda Richardson sticks her nose in…

Return of the Courtesan by Victoria Blake

As the beautiful and formidable Tullia Buffo, once the most desired courtesan of the age, returns home to Venice, she faces ruin. It’s 1576 and most have fled the plague ravaged city. But now Tullia must fight for her life and protect her secrets.

The gondolier Sebastiano, a keeper of secrets, has plied his trade on the canals of Venice his whole life, soaking up gossip and scandal. As a boy, he saved his family from destitution after the terrible wrong the painter Titian’s son did to his father. Now, with Titian dead and his son in Venice to claim his inheritance, the time has finally come for Sebastiano’s revenge.

In the present day, events from centuries earlier suddenly engulf the lives of ordinary people as far distant as London and New York as they are touched by the enduring legacy of Tullia, a lost Titian masterpiece and the secrets of old Venice…

One woman’s struggle to fight back against the enemy in order to protect the ones she loves.

When Arlette Blaise sees a German plane fly over the family farm in 1940, she’s comforted by the fact that the occupying forces are far away in the north of the country. Surely the war will not reach her family in the idyllic French countryside near to the small town of Oradour-sur-Glane?

But then Saul Epstein, a young Jewish man driven from his home by the Nazis, arrives at the farm and Arlette begins to realise that her peaceful existence might be gone for good …

She has a burning ambition, but everything conspires against her dreams.

France, 1897. Born to a modest farming family, Marie-Thérèse has a remarkable singing voice and wants to become a professional singer. But too many obstacles, including her parents’ opposition, stand in her way. And, through no fault of her own, she makes a dangerous enemy of the local landlord.

When the family circumstances change suddenly, Marie-Thérèse and her mother must move to Paris to work in her aunt’s restaurant. Her ambitions rekindle, but the road to success is paved with setbacks until a chance meeting gives her a precious opportunity.

She is close to achieving all her dreams, but the ghosts of the past come back to haunt her and threaten Marie-Thérèse’s life as well as her career.

The Muse of Fire by Carol M. Cram

Based on real events, The Muse of Fire takes readers behind the scenes of London’s massive Covent Garden theater at the dawn of the 19th Century. The intrigue, romance, and betrayal swirling around the actors offstage rivals anything they must perform onstage.

After the death of her mother, Grace Johnson follows her abusive father to London and discovers a passion for the stage. But she must fight against social norms to find her place as a Shakespearean actress in the fraught world of early 19th Century theater. Aided by Ned, a foundling who takes charge backstage at the Theatre Royal, Covent Garden, Grace becomes ensnared by intrigues and setbacks that mar the pathway to stardom she craves.

Set against the tumultuous backdrop of the Old Price Riots of 1809, Grace and Ned find common purpose in a quest that threatens to tear both their worlds apart.

The Embroiderer by Kathryn Gauci

A richly woven saga set against the mosques and minarets of Asia Minor and the ruins of ancient Athens.

1822: As The Greek War of Independence rages, a child is born to a woman of legendary beauty on the Greek island of Chios. The subsequent decades of bitter struggle between Greeks and Turks simmer to a head when the Greek army invades Turkey in 1919. During this time, Dimitra Lamartine arrives in Smyrna and gains fame and fortune as an embroiderer to the elite of Ottoman society. However, it is her granddaughter, Sophia, who takes the business to great heights as a couturier in Constantinople only to see their world come crashing down with the outbreak of war.

1972: Eleni Stephenson is called to the bedside of her dying aunt in Athens. In a story that rips her world apart, Eleni discovers the chilling truth behind her family’s dark past plunging her into the shadowy world of political intrigue, secret societies and espionage where families and friends are torn apart and where a belief in superstition simmers just below the surface.

When the Gestapo extends an offer, there’s no way to refuse.

Sabine always minded her own business, closing her eyes to the sinister events engulfing Germany. War is always ugly, and it’s best to simply stay out of harm’s way.

That changes the moment the Gestapo needs information from her. With her husband held captive, his very life depends on her willingness to cooperate in this evil enterprise. Soon, she’s thrust into the midst of the resistance, smuggling people out of Nazi Germany.

Her task? Find the leader and hand him over to torture and certain death.

If she does as she is asked, she betrays her own people. If she does not, her husband will be executed by Hitler’s forces. Can she silence her conscience and save her husband?

Wartime Holland. Who can you trust?

Deep in the Veluwe woods lies a secret that frustrates the Germans. Convinced that Jews are hiding close by they can find no proof. The secret is Berkenhout, a purpose-built village of huts sheltering dozens of persecuted people.

Young tearaway Jan roams the woods looking for adventure and fallen pilots. His dream comes true when he stumbles across an American airman, Donald C. McDonald. But keeping him hidden sets off a disastrous chain of events. Sofie, a Jewish Dutch girl, struggles to adapt to living in Berkenhout, away from her family and friends. As weeks turn to months, she’s worried they’ll abandon her altogether.

Henk Hauer, head woodman, is in charge of building the underground huts and ensuring the Berkenhout inhabitants stay safe. But many grow suspicious of his liaisons with the Germans. Is he passing on secret information that could endanger lives? All it takes is one small fatal slip to change the course of all their lives forever.

The Tuscan Secret by Angela Petch

Il Mulino. An old crumbling mill, by a winding river, nestled in the Tuscan mountains. An empty home that holds memories of homemade pasta and Nonna’s stories by the fire, and later: the Nazi invasion, and a family torn apart by a heartbreaking betrayal.

Anna is distraught when her beloved mother, Ines, passes away. She inherits a box of papers, handwritten in Italian and yellowed with age, and a tantalising promise that the truth about what happened during the war lies within.

The diaries lead Anna to the small village of Rofelle, where she slowly starts to heal as she explores sun-kissed olive groves, and pieces together her mother’s past: happy days spent herding sheep across Tuscan meadows cruelly interrupted when World War Two erupted and the Nazis arrived; fleeing her home to join the Resistenza; and risking everything to protect an injured British soldier who captured her heart. But Anna is no closer to learning the truth: what sent Ines running from her adored homeland?

When she meets an elderly Italian gentleman living in a deserted hamlet, who flinches at her mother’s name and refuses to speak English, Anna is sure he knows more about the devastating secret that tore apart her mother’s family. But in this small Tuscan community, some wartime secrets were never meant to be uncovered…