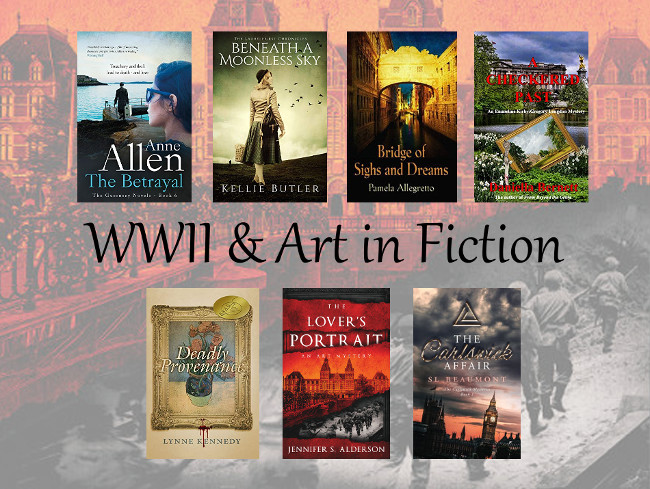 In the mood for a fascinating thriller or historical fiction novel about art and World War II?

Several of these thrilling reads involve amateur sleuths, investigative reporters, and art historians hot on the trail of missing Nazi-looted artwork – often with deadly results. Others provide a fascinating insight into the lives of artists affected by the war.

Most of these titles are also available as audiobook, paperback and in Kindle Unlimited. Don’t forget – books make great gifts!

After studying for a year in the Netherlands, Zelda scores an internship at the prestigious Amsterdam Historical Museum, where she works on an exhibition of paintings and sculptures once stolen by the Nazis, lying unclaimed in Dutch museum depots almost seventy years later. When two women claim the same painting, the portrait of a young girl entitled Irises, Zelda is tasked with investigating the painting’s history and soon finds evidence that one of the two women must be lying about her past. Before she can figure out which one it is and why, Zelda learns about the Dutch art dealer’s concealed collection. And that Irises is the key to finding it all.

Treachery and theft lead to death – and love.

1940. Teresa Bichard and her baby are sent by her beloved husband, Leo, to England as the Germans draw closer to Guernsey. Days later they invade…

1942. Leo, of Jewish descent, is betrayed to the Germans and is sent to a concentration camp, never to return.

1945. Teresa returns to find Leo did not survive and the family’s valuable art collection, including a Renoir, is missing. Heartbroken, she returns to England.

2011. Nigel and his twin Fiona, buy a long-established antique shop in Guernsey and during a refit, find a hidden stash of paintings, including what appears to be a Renoir. Days later, Fiona finds Nigel dead, an apparent suicide. Refusing to accept the verdict, a distraught Fiona employs a detective to help her discover the truth…

Searching for the rightful owner of the painting brings Fiona close to someone who opens a chink in her broken heart. Can she answer some crucial questions before laying her brother’s ghost to rest? Who betrayed Leo? Who knew about the stolen Renoir? And are they prepared to kill – again?

Who can she trust?

When 18-year-old student Stephanie Cooper investigates the mysterious circumstances surrounding her great aunt’s death, she discovers a painting thought stolen by the Nazis and destroyed during WWII, hanging in the home of the intriguing James Knox, guitarist with indie band, The Fury.

Now, as Stephanie gathers proof to unmask a thief and possible killer, she discovers that someone does not want her to uncover the secrets of her family’s past and that someone may kill to stop her.

Emmeline Kirby is back in London determined to make a success of her new job as editorial director of investigative features at The Clarion. Three months have passed since her trip to Torquay and the devastating revelations that surfaced about her fiancé Gregory Longdon. The whole interlude has left a bitter taste in her mouth, and she is keeping him at arm’s length. But a suave and dashing jewel thief like Gregory is not easily daunted. After all, faint heart never won fair lady. It doesn’t hurt that Emmeline’s grandmother and her best friend, Maggie, are on his side. Only his shadowy past could ruin his chances.

All of these relationships are threatened as Emmeline stubbornly pursues a story about looted Nazi art and an IRA collaborator. When a stolen Constable painting belonging to Maggie’s family turns up in the collection of Max Sanborn, the chairman of the company that owns The Clarion, her personal crusade brings danger close to home. To find the truth, Emmeline and Gregory must untangle a web of deception, betrayal, and dark deeds. But will they learn too late that justice can be cold comfort if you’re dead?

Beneath a Moonless Sky

Nothing good ever happens past twelve. When thirteen-year-old Lydia Cavert returns to Laurelhurst Manor, the wild, lush boyhood home of her beloved Papa, she rediscovers that its secret rooms and locked doors are more sinister than any London street.

Orphaned by the blitz of 1940, her guardian uncle Alistair and his circle of friends hold Lydie captive at the estate. Lydie must unravel a dark web of deceit, jealousy, and revenge to expose who really murdered her mysterious aunt on that fateful night in 1932. Will she restore her family’s name or suffer her aunt’s fate?

Set amidst the backdrop of the Second World War, Beneath a Moonless Sky is a suspenseful coming of age tale of the power of memory, innocence lost, redemption restored, and the triumph of light over darkness.

“Still Life: Vase with Oleanders” is a painting by Vincent van Gogh, believed to have been confiscated by the Nazis during the Second World War.

Today, almost seventy years later, world-renowned digital photographer, Maggie Thornhill is searching for the missing work of art. Her lifelong friend, Ingrid, has asked her to do the impossible — authenticate the painting from a photograph.

The photograph in question was passed down to Ingrid by her grandfather, Klaus Rettke a key member of the German Einsatzstab Reichsleiter Rosenberg, the Nazi organization appointed to confiscate art from the Jews. Obscure references in Klaus Rettke’s diary convince Maggie that Rettke stole the painting from the Nazis. Now she must use science to verify that the painting in the photo is genuine, something that has never been done before.

From the National Gallery of Art in Washington, D.C. to the Musée du Jeu de Paume in Paris, Maggie searches for answers. Finally, she confronts the possibility that there is not one painting, but the original and several forgeries. With tens of millions of dollars at stake and a killer at large, she is determined to find the authentic Van Gogh. To do so, Maggie must stay alive . . . something that’s proving difficult to do.

2 thoughts on “WWII & Art in Fiction”