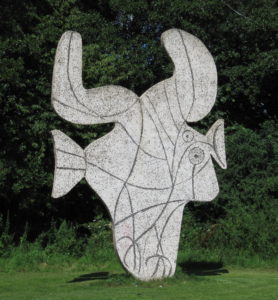 Scattered throughout Amsterdam’s largest city park – Vondelpark – are several statues and sculptures, including one designed by Pablo Picasso, Figure découpée l’Oiseau. Though Picasso intended it to be a bird (note the feet recognizable at the bottom of the sculpture), Amsterdammers have always seen it as a fish and locally it’s known as ‘Picasso’s Fish statue’.

It was a gift from the artist to Amsterdam in 1965. That same year, the city organized an exhibition of artwork featuring some of the most important international sculptors at that time, to commemorate Vondelpark’s 100th year of existence. It was curated by Willem Sandberg, then director of the Stedelijk Museum. Picasso allegedly gave the sculpture to Amsterdam as a token of his friendship with Sandberg.

But was it really his to give? The great artist himself created a small, scale model of the sculpture out of sheet metal, and the Norwegian artist Carl Nesjar created the eight-meter high version now standing in Vondelpark. Nesjar was an acclaimed painter, sculptor and graphic artist who developed a unique method of concrete sculpting called “betograve”. He introduced Picasso to the technique, sparking a twenty-year collaboration during which time Nesjar turned twenty-four of Picasso’s drawings and scale models into large public sculptures.

Figure découpée l’Oiseau is also executed in betograve; white concrete was poured into a form tightly packed with black stones, then – once set – Picasso’s lines were sandblasted into the slab, exposing the gravel beneath the surface.

When you read about Carl Nesjar and his oeuvre, the sculptures he and Picasso collaborated on are usually credited as: “Designed by Pablo Picasso, executed by Carl Nesjar.”

What do you think: Is our beloved Fish statue a Picasso? Or is it really a Nesjar?

Here’s a beautiful 2-minute long video of the 1965 exhibition in Vondelpark: https://www.youtube.com/watch?v=xVCZQB7KVtk&list=PLK88Z0irYdB3p1aVdDaLblZNWvu6yoF_m

One thought on “Is there a sculpture by Picasso in Vondelpark?”