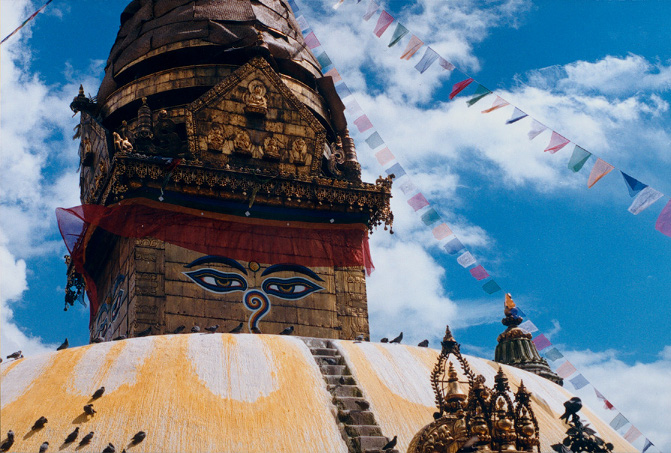 The Swayambhunath stupa is one of the most recognizable symbols of Nepal, which is why I chose to feature a silhouette of it on the cover of my debut novel, Down and Out in Kathmandu: A Backpacker Mystery It is part of a large temple complex perched on a sliver of land rising high above the Kathmandu Valley floor, collectively known as the ‘Monkey Temple’ thanks to the colony of well-fed primates which reside there.

The central stupa is topped by a gold-colored block onto which Buddha’s face has been painted on all four sides. Some say his watchful eyes are intentionally menacing so as to ward off evil. The nose is the Nepali number ‘1’ as well as the symbol for unity. The stupa’s broad white base represents the four elements: earth, wind, fire and air. Prayer flags covered in mantras flutter from lines attached to the stupa’s spire, allowing the wind to spread their holy messages. The thirteen concentric rings on the spire symbolize the thirteen steps which must be taken to achieve Nirvana, represented by the umbrella perched on top.

I took this picture in the fall of 1999, during one of many visits to this awe-inspiring UNESCO site while volunteering in the Kathmandu Valley as an English teacher. Miraculously this enormous stupa survived the devastating earthquake of April 2015, though most of the surrounding temples and shrines did not. I feel privileged to have seen this complex in its full glory.

“She paid her entry fee and rushed through the last gate, anxious to get inside. An enormous eye stopped her in her tracks. It floated ominously above a half-dome the height of a five-story building, painted completely white.
“What is that?”
“It is a Tibetan stupa, a holy place for Buddhist peoples. The eye of Buddha reminds us he is always watching.”
“And that one there?” Zelda pointed towards a large stone cylinder, covered in ornate carvings.
“That is an Indian stupa, Hindu people pray there.”
“But they are right next to each other!”
“Yes?” Khamel looked at her quizzically before moving on.