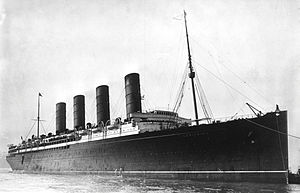 Today I’m honored to have MysteryThrillerWeek author Marie Silk as a guest on my blog.

I’m an advocate of conducting extensive historical research before writing about events of the past and I know Marie Silk is, too! To write the fourth book in her Davenport House series, Heiress Interrupted, she sailed across the Atlantic Ocean in the name of research.

Many chapters of Heiress Interrupted take place aboard the RMS Lusitania during its last voyage across the Atlantic Ocean. Marie shares with us many fascinating details about this tragic journey and those on board, as well as how she managed to capture ‘the wonder, excitement, motion sickness, terror, and profound bonds of friendship that could have happened aboard the RMS Lusitania in the year 1915.’

Sailing the Atlantic for Research

I am grateful to author Jennifer S. Alderson for this chance to share a little about the inspiration behind the fourth book in my historical fiction series.

Many chapters of Heiress Interrupted take place aboard the RMS Lusitania on its last fateful voyage across the Atlantic Ocean. The Lusitania left the pier in New York on May 1, 1915 bound for Liverpool, England. Many “important” people at the time were warned about sailing on the ship, for it was destined to have a part in The Great War being waged in Europe. The tragic loss of 1,195 lives was the result of sailing despite the many warning signs.

In the second book of my series, a wealthy socialite named Nellie Whitmore seeks a traveling companion for this very voyage. Even though the second and third books move past this particular event, Heiress Interrupted finally tells Nellie’s side of the story aboard the ship!

I recently embarked on a Norwegian cruise that sailed from the United States to Europe. My husband and I had been on cruises before, but this was the first one that would cross the Atlantic. I wrote the first segment of Heiress Interrupted while on this voyage, but superstition prevented me from writing the portion about the actual sinking of the Lusitania! I planned to wait until we were safely home :).

I was fortunate enough to meet a passenger who had immigrated to the United States aboard a ship in the 1950’s. I wanted to hear everything about his experience crossing the ocean so many years ago, especially about what it was like in third class. He told me that they were not allowed to interact with the first class passengers or wander into the first class sections. He also said that he shared a room with his family of twelve. I enjoyed hearing about the experience and thought about how I could later adapt the feelings shared to the story I was writing.

I studied the layout of the Lusitania so that descriptions within the ship would be historically accurate in my book. I originally intended to paint a dismal picture of the third class accommodations, but further research revealed that the Lusitania was regarded as one of the best ships for third class passengers. This meant that one of the subplots I was going to use about the “deplorable conditions in third class” would not work. A story idea can change very quickly for the historical fiction author who wishes to keep things as accurate as possible, and this is one example of modifying the story in my imagination to be compatible with real history. I carefully consider details even down to the placement of the fireplace and elevators in the ship in order to keep the story real.

I watched several documentaries about the sinking of the Lusitania and read as many survivor stories as I could find. It was important to me to capture the feelings that real people aboard the ship experienced during the sailing and sinking.

Here I was embarking on a transatlantic voyage 100 years later. I imagined that the excitement I felt while entering the ship and seeing the beautiful interior was similar to how the Lusitania passengers felt when they first stepped on board. I thought about how I felt during the emergency drill and how scary it would be to actually abandon ship in the icy Atlantic waters. I thought about how much can happen in a short span of time on a cruise, how many people we meet, how many friends we quickly make because we are literally all in the same boat.

Some days, our ship rocked so badly that the captain had to assure us that it was “normal” for the North Atlantic. A few times from the dining room, we could see the crests of the swells through the window which seemed alarmingly high, and we watched our ship rise and crash down with them. I wondered if it was really as normal as the captain said! I went through nearly a full box of Dramamine. I thought about how much more challenging it must have been to sail 100 years ago. The fourteen day voyage was one of the most incredible experiences of my life that I will never forget.

As a historical fiction author, I hope that I did justice in capturing the wonder, excitement, motion sickness, terror, and profound bonds of friendship that could have happened aboard the RMS Lusitania in the year 1915.

Thank you for reading about my adventure.

Did you enjoy reading about her research trip? Now is your chance to read her series at a discounted price! Today only, several books in the Davenport Series, including Heiress Interrupted, will be on sale, discounted from 2.99 to 99 cents on Amazon.com and 99p on Amazon UK. 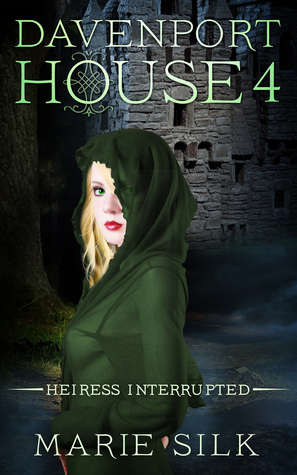 More to the story is revealed in this fourth book to Davenport House.

Nellie Whitmore is accustomed to life as a carefree heiress, but her claim to the family fortune is at risk because of a new heir. Nellie is sent to Britain to be married before word spreads of her changing circumstances.

What begins as a luxurious voyage becomes a fight for survival when the ship is caught in the midst of the War, forever changing the people who live to tell about it.

Friendship is kept afloat by telegrams between London and Davenport House. Mary Davenport announces exciting news, and the servants prepare for more changes downstairs. Ethan is anxious to move to Philadelphia, but becomes overworked while the estate is in search of a new groundskeeper.

Relationships become strained when the unthinkable shakes the foundation of the house, and the ladies are left to evaluate the risks of keeping secrets. 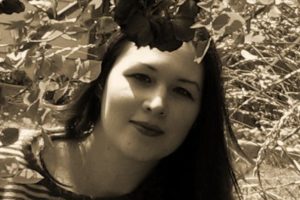 Marie Silk enjoys writing stories and plays in many genres. She lives with her family in the United States and travels to new countries each year.

She loves to visit castles, ruins, and other historical sites as often as possible. Marie is a collector of LEGO and random cool things.

Her favorite books to read are supernatural, history, and psychology. She is the author of the Davenport House family saga.

Do you love to read mysteries and thrillers set in bygone eras? Davenport House 4: Heiress Interrupted is one of 20+ novels in MysteryThrillerWeek’s Historical Mysteries and Thrillers Theme. Click here to see the entire list of exiting MTW titles.

Don’t forget to check back here on January 30th for the fourth theme post about Amateur Sleuth Mysteries and Thrillers by MTW authors.

9 thoughts on “MTW: Sailing the Atlantic for Research by Marie Silk”