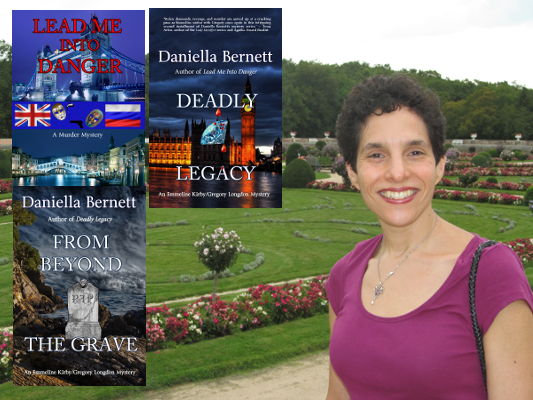 It is my pleasure to welcome author Daniella Bernett to my blog today! Her mystery series featuring journalist Emmeline Kirby and jewel thief Gregory Longdon, transports readers through England and Italy as her lead characters become embroiled in increasingly dangerous murder mysteries. You can read my review of her first novel, Lead Me Into Danger, at the bottom of this post.

Daniella is also one of the many talented authors participating in Mystery Thriller Week this February. You can sign up now as a Super Fan to be kept abreast of giveaways, interviews and special sales before and during the event!

But first, take a moment to learn more about her series of mysteries involving Emmeline and Gregory. 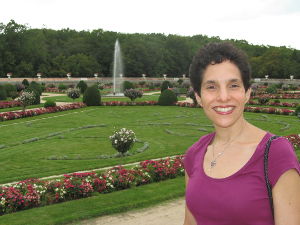 I am a member of the Mystery Writers of America New York Chapter. I graduated summa cum laude from St. John’s University with a B.S. in Journalism. I am the author of a mystery series featuring journalist Emmeline Kirby and jewel thief Gregory Longdon. They are former lovers. Both are British and my series takes place in the United Kingdom and Europe. The first three books are LEAD ME INTO DANGER, DEADLY LEGACY and FROM BEYOND THE GRAVE. LEAD ME INTO DANGER is set in Venice and London, my two most favorite cities in the world. In this book, Emmeline and Gregory haven’t seen each other in two years, but she literally runs into him in Venice after witnessing two men try to murder her colleague. Then, Emmeline and Gregory become ensnared in a hunt for a Russian spy in the British Foreign Office. DEADLY LEGACY, Book 2, is about $100 million in stolen diamonds, revenge and murder. It takes place in London. FROM BEYOND THE GRAVE is set in the seaside resort of Torquay along the English Riviera in Devon. It’s about the deep, dark secrets of Gregory’s past, love, betrayal and, of course, murder. 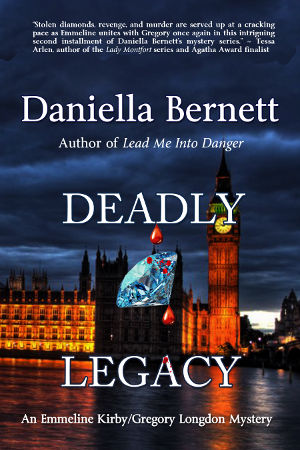 Sitting next to Agatha Christie on a long flight (the longer the better) would be a dream for me. Christie is the author who influenced me the most. It would be fascinating to exchange ideas with her about the craft of writing in general and mysteries in particular. I would hang on her every word, absorbing things like a sponge. I would try to learn how a master conceives such deliciously wicked and ingenious plots that have kept readers turning pages generation after generation. Christie’s books never fail to entertain. I would like readers to be talking about my books long after I’m dead. I try to leave readers wanting more, like Christie did with such consummate skill. I hope I’m succeeding.

It’s very simple. Writing is like breathing. It’s something I must do. I can’t imagine not writing. I would be like an empty shell, lost and forlorn on a stretch of silken sands. I love devising plots, adding twists and turns, and leaving a string of red herrings in my characters’ wake just for a bit of fun.

Everyone comes from different backgrounds. Each one of us is shaped by the myriad people with which we come into contact; the situations in which we find ourselves; and the opportunities we given—and let slip through our fingers—in life. It is this confluence of factors combined with our inherent nature and temperament that make us unique.  Therefore, only I could have conjured up Emmeline and Gregory. It is the story that I wanted to tell.

Mysteries and romantic suspense are terribly appealing, like a siren call to my soul. I like trying to unravel the puzzle and solve the crime before the sleuth. For me, it has always been about answering the question, “Why?” I love following the clues that the author has strategically dropped. Once the reader understands a criminal’s motivation, everything falls into place. Also, a dash of romance adds another layer to the story, sharpening it some ways and giving it piquancy. 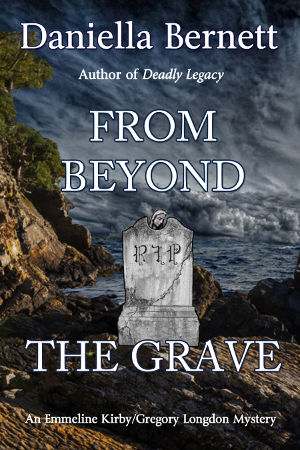 I chose to write a series because I wanted to take time to develop my characters—their flaws, admirable qualities, likes and dislikes. Each book provides another nugget of information to peel back the curtain on Emmeline and Gregory, while also leaving something dangling. After all, the human species is full of contradictions that are begging to be explored. At this stage, I don’t have any idea how many books will be in the series. I will keep writing about Emmeline and Gregory’s adventures until I can’t think of any more trouble in which to embroil them. If, and when, I reach that point, perhaps I’ll have conceived a new series and off I’ll go in a new direction.

I think a part of every author is in his or her characters. Perhaps it’s a trait you wish you had. Or a witty riposte you should flung back at some quite insufferable person. Now, as an author, you have a second chance. Anything is possible. The author and his or her characters set out on a journey together. It’s a conspiracy, if you will. Each brings something distinctive to the story as it unfurls. Once the reader has made the emotional connection with your characters, you have them hooked because they have to know more.

I’m actually working on Book 6. However, I would be happy to give you a tiny hint about what awaits Emmeline and Gregory in A CHECKERED PAST, Book 4, which will be released in fall 2018. Three months have passed since Emmeline’s trip to Torquay and the devastating revelations that surfaced about Gregory. The whole interlude has left a bitter taste in her mouth. She has thrown herself into her work and is keeping him at arm’s length. But suave and charming Gregory is not giving up — neither are Emmeline’s grandmother and her best friend, Maggie. After all, faint heart never won fair lady. Hold your breath to see if he succeeds in his suit. Other threads in the story revolve around looted Nazi art, a former IRA commander and oh, yes, murder.

Thanks for stopping by, Daniella!

You can connect with Daniella Bernett via her website, Facebook and Goodreads. You can buy her books on Amazon, Barnes and Noble, iTunes, Smashwords and signed copies at the Mysterious Bookshop. 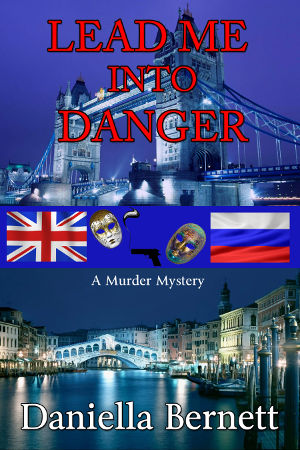 Lead Me Into Danger is a well-constructed murder mystery set in Venice and London.

Both cities are beautifully described in a way that made me feel as if I was walking alongside the characters.

Emmeline Kirby is a headstrong journalist who puts her own life at risk to uncover the truth about a fellow journalist’s death. During her investigation, she is shadowed by her former lover Gregory Longdon. Their romantic interplay reminded me of gentle Cary Grant style films, though the story is set in the present.

I enjoyed the story and characters. I look forward to reading the rest of the series.