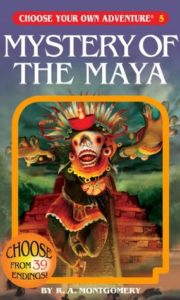 Writing the first draft of a new mystery always reminds me of a Choose Your Own Adventure novel. This is a time of discovery, when I let my imagination go and try to envision multiple versions and outcomes of the same scene. Much in the same way the wonderful Choose Your Own Adventure series of young adult books by R. A. Montgomery, allows readers to determine the characters’ destiny by deciding what happens at the end of each chapter.

When drafting, there are so many possibilities as to the direction the story can take, who the villains might be, as well as the motivations, strengths and weaknesses of my heroine and key players. At this early stage, I like to write out multiple possible outcomes for key chapters and often create several versions to later pick and choose from. I try not to censor myself, no matter how silly the idea may be. Heck, if I did, I doubt a drone would have played an important role in my rather serious historical fiction art mystery, The Lover’s Portrait.

However, not all of my crazier ideas make it into my books. For example, in the first draft of The Lover’s Portrait, one ending had Zelda breaking into the US Consulate on Amsterdam’s Museumplein, get caught, and then blackmailed into working for the CIA.

I think we’re all glad I didn’t go that route.

When going from draft one to two, I have to choose just one path. That to me is the most difficult part of editing. But until I do, it’s impossible to really flesh out the story.

So that’s where I’m at right now, forcing myself to weight and measure each possible turning point and see which ones make my next art-related mystery a thrilling adventure that (hopefully) captures readers hearts. No pressure!

Fellow authors, how do you approach your first draft? Do you let your imagination go? Or do you already know exactly what is going to happen once you start writing?