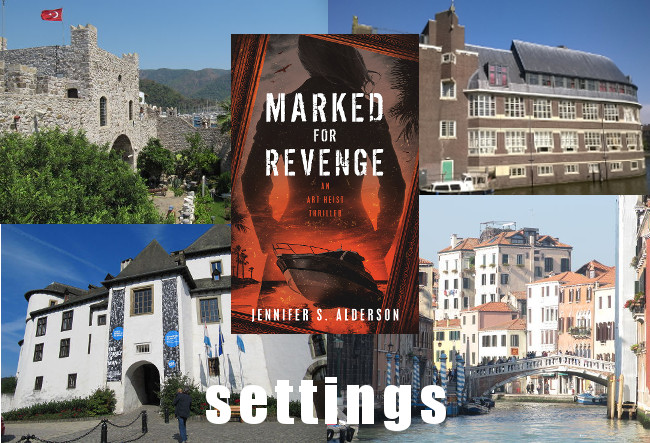 My latest novel, Marked for Revenge, is an art heist thriller about the theft of forty paintings from modern art museums spread across the Netherlands. It is also the third novel in this series featuring art history student and reluctant amateur sleuth, Zelda Richardson.

In this book, one of the museum’s Zelda Richardson is working for is robbed at the beginning of the novel and soon our heroine finds herself entangled with the robbers, mob, and police. To save herself and those she loves most, Zelda teams up with Vincent de Graaf, a private investigator specializing in the recovery of stolen artwork. Together they follow a trail of clues across Europe to a final showdown in Turkey that may cost them their lives. You will have to read the novel to find out if they both survive!

As you will soon see, my own travel adventures influenced my setting choices. Luckily my adventures’ locations coincided nicely with places that are well suited for the settings of the major plot twists in this novel!

The story begins with a robbery at Vianden Castle in Luxembourg. I visited this imposing monument a year ago and knew immediately it had to feature in one of my novels. Its location is spectacular and the building itself fits any description of a fairy tale castle.

Vianden Castle also has ancestral ties to the current Dutch monarchy – the House of Orange-Nassau. These kinds of connections to Dutch culture and history often appear in the novels in the Zelda Richardson Mystery Series. This has everything to do with my decision to stay in the Netherlands, instead of returning to America after studying art history at the University of Amsterdam.

In Marked for Revenge, an exhibition of watercolors owned by the Dutch royal family are stolen from Vianden Castle by audacious thieves in a brazen robbery that garners international headlines. The exhibition and robbery are figments of my imagination.

The castle’s location high up on a ridge, built over the Or valley, inspired my thieves’ getaway.

Marmaris, Turkey is an important location in this novel. One of the main characters, Kadir Tekin, lives here and an important meeting takes place in this beach side resort at the end of my novel.

Turkey is an intergral part of the Balkan Route, a route used to transport drugs into Europe. It’s also an incredibly fascinating and beautiful land, one my family and I enjoy visiting!

Last summer my family and I spent a wonderful two weeks exploring the Marmaris region and neighboring Dalyan. Marmaris is not only a popular vacation spot for Europeans, it is also popular among wealthy Turks and the many bars, clubs, and restaurants all cater to these jetsetters. The town’s position in a valley surrounded by mountains and blue-green water is stunning, the food is wonderful, and the locals are extremely friendly.

However, it was the boats that made me use it as a location in this novel. I have never in my life seen so many boats, yachts, schooners, trawlers, you name, as I have in Marmaris. The entire city is one enormous, gorgeous marina, with piers placed feet apart.

In Marked for Revenge, Zelda Richardson is working at the Amstel Modern, a fictitious art museum in Amstelveen, one known for its collection of Dutch modernists. In my novel, the exhibition Conversations with American Modernists is about to start. Zelda is researching works by several American Abstract Expressionists artists that are going to be displayed in Amstelveen. The exhibition features several important works by CoBrA artists – the most famous of which is arguably Karel Appel.

Too soon, her joy is replaced with sorrow as the Amstel Modern is one of seventeen museums robbed by a brazen gang of art thieves. Unfortunately for Zelda, she also falls under suspicion…

Het Sieraad, a monumental building in Amsterdam, is Zelda’s new home. She’s subletting an apartment from an artist for a year. This imposing structure was originally constructed as a trade school. It has been recently renovated and converted into offices, a day care, restaurants, and apartments.

In order to clear her name, Zelda teams up with art detective Vincent de Graaf. He is also searching for the stolen art and believes Zelda has information he can use to find it. They travel to Clervaux, Luxembourg to follow up on a lead. While they are there, Zelda and Vincent visit the Battle of the Bulge War Museum and Family of Man photo exhibition.

A wonderful family trip to this region in 2015 inspired me to use Clervaux Castle as a setting.

Dalyan, Turkey also makes a brief appearance in this novel.

After visiting the region last year, I couldn’t resist using this incredibly beautiful town and river delta as one of the settings. It is known for its mineral mud baths, sea turtles, and royal tombs carved high up into the cliff faces.

Zelda and Vincent’s search also takes them to Venice, Italy. Zelda is in heaven, even though Vincent doesn’t leave her much time to see many of the spectacular sights. They do explore the Dorosoto neighborhood and have time for a quick visit to Peggy Guggenheim’s museum.

The trail of clues eventually leads Zelda and Vincent to Marmaris, Turkey. Several locations are of importance to the final, captivating showdown – the Grand Bazaar, Marmaris Castle, Nestle Marina and Marmaris Bay.

You will have to read the book to find out how exactly they are important to the plot!

I hope you enjoyed learning more about my art heist thriller, Marked for Revenge.

You can purchase the eBook or paperback on Amazon now.

Coming soon to Barnes & Noble, Waterstones, and other fine retailers.

A museum researcher’s new job leads her on a bizarre journey into shady art world doings and criminal intent in this fast-paced, amateur sleuth thriller set in the Netherlands, Italy, Croatia, and Turkey.

3 thoughts on “Marked for Revenge: Settings of my Art Heist Thriller”