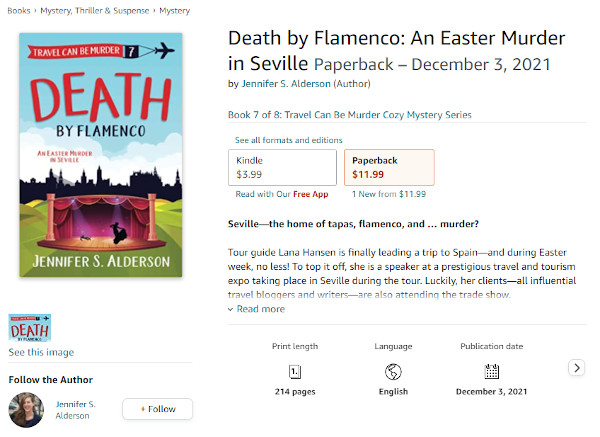 Great news! The paperback and large print editions of Death by Flamenco: An Easter Murder in Seville are now available for purchase on Amazon worldwide!

The eBook version releases on Amazon on December 10, 2021, and the paperback edition will be for sale on other retailers soon after.

Death by Flamenco: An Easter Murder in Seville

(Book Seven of the Travel Can Be Murder Mystery Series)

Tour guide Lana Hansen is finally leading a trip to Spain—and during Easter week, no less! To top it off, she is a speaker at a prestigious travel and tourism expo taking place in Seville during the tour. Luckily, her clients—all influential travel bloggers and writers—are also attending the trade show.

Lana is excited to speak at the conference … that is, until Chet Rogers—an eminent travel writer being honored at the expo—publicly humiliates her and several of her guests.

When Chet is killed during a workshop soon after, Lana is one of the Spanish police’s prime suspects. But she is not the only one in her group who would rather see Chet out of the picture—permanently.

Can Lana sleuth out the killer’s true identity and dance her way out of a jail sentence before her group’s tour to Seville is over?

Purchase your paperback or large print edition of Death by Flamenco: An Easter Murder in Seville now! Or preorder the eBook and read it on December 10.