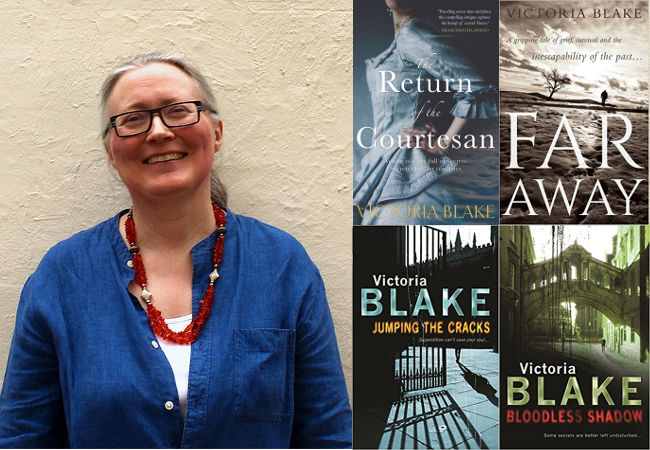 It is a special treat for me to kick off the 2018 edition of ‘Spotlight on…’ by featuring Victoria Blake, an author I greatly admire. Her historical fiction novel Titian’s Boatman was my favorite read of 2017. (Many thanks to TripFiction for asking me to review it!) I also enjoyed her crime fiction mystery Jumping the Cracks, and look forward to reading the rest of the Sam Falconer series.

She is the author of eight books spanning the mystery, historical fiction and non-fiction genres. Born in Oxford, she now lives in London, though her birthplace does play a role in her current work-in-progress. Read on to learn more about her books, life, influences, chats with Titian, and the fascinating history of Oxford’s Turf Tavern.

I hope you enjoy reading her interview as much as I did! 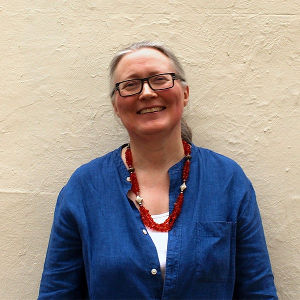 Hi and thank you so much for having me on your blog. I am the author of eight books. My most recent is The Return of the Courtesan (hardback title Titian’s Boatman) set partly in sixteenth century Venice and partly in 21st century London and New York. It was listed in the top ten books set in Venice on The Venice Insider website last year. Before that I wrote a crime series set in Oxford and London figuring a private investigator Sam Falconer. I have also written two true crime books for the National Archives: one about Ruth Ellis, the last woman to be hanged in England and one on Florence Maybrick, a Victorian arsenic poisoner. My historical novel Far Away, set in Italy during the Second World War, was short listed for the 2016 Historical Novel Society Indie award. I live in London. I studied history at Oxford and have worked in law, publishing and bookselling. 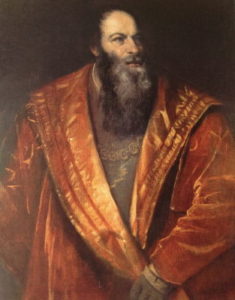 I would like to sit next to Pietro Aretino. He lived in Venice in the sixteenth century and was a great friend of the painter, Titian, both he and Titian figure in my book.  One of the pleasures of researching the novel was reading Aretino’s letters. They are scurrilous, funny, and filled with the kind of details that novelists crave: his passion for salad, his gratitude at receiving an enormous cheese, advice to his gondolier never to marry, advice to Titian’s son to get back to his studies. He loved Venice and he loved Titian who he thought was a genius. He was a poet, a rogue, a chancer, a man of vast appetites. Hang on, maybe on second thoughts this isn’t such a good idea. How long is the flight going to be? God knows what he might get up to!

I would also like to sit next to the actor Lily Tomlin because I adore everything she’s ever been in including Grace and Frankie, series three of which is about to come back onto Netflix very soon. Hurrah! I think she’d also manage to keep Aretino in order. Maybe she’d drug him!

If your book takes place in the past what inspired you to write in this particular era. 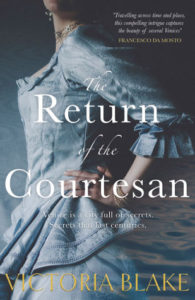 The Return of the Courtesan (aka Titian’s Boatman)  takes place partly in sixteenth century Venice and the inspiration behind that was my love of a particular painting by Titian, The Man with the Blue Sleeve (aka A Man with a Quilted Sleeve and Portrait of Gerolamo (?) Barbarigo 1510), which currently hangs in Room 2 of the National Gallery in London. I tend to visit art galleries between books. At that stage I’m usually fed up with everything to do with writing but at the same time terrified I’ll never write another one.

Standing in front of the painting I always found bracing because I imagined him being sarcastic about my neurotic state of mind and uttering caustic and completely unhelpful remarks. I can never make up my mind whether he’s about to smile or sneer. His expression seems to rest exactly between those two possibilities. 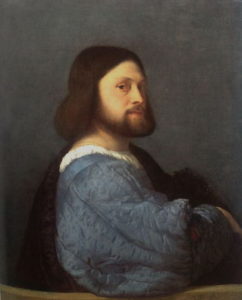 I had stood in front of this painting many times before I even realized it was by Titian. Then one day I read the notice next to it and it said that Titian painted him when he was about twenty years old. Wow, I thought, that’s young and so I started researching Titian, who was one of the geniuses of the Italian Renaissance and that was the beginning of my next book. I visited him the other day and his sleeve seemed much bluer than I remembered it and his expression much more friendly, so hopefully that denotes good things for the New Year!

My favourite character in The Return of the Courtesan is Sebastiano da Canal, the gondolier. He’s cunning and patient and resourceful. I heard his voice incredibly clearly in my head right from the beginning and there was an earthiness and trickster energy to him I delighted in. In the book I follow him from being a young boy deep into his old age. Incidentally, I still do hear him. It’s interesting when a character’s voice continues beyond the confines of a book. At the moment there’s no indication that he’s going to shut up any time soon, so maybe my next book should be called The Return of the Gondolier! 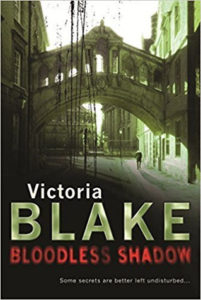 My father was a writer. He taught politics at Christ Church College Oxford and throughout his life he was writing, either books, lectures or journalism. He wrote a book which was viewed as being one of the best political biographies of the twentieth century, a biography of British Prime Minister Benjamin Disraeli. I think seeing him write must have had some kind of influence on me as a child although I’m slightly at a loss to pin down exactly what it was. Maybe it had something to do with being fascinated with his level of self-absorption and concentration and being curious as to where he had gone to when he was writing. It seems trite to say that I became a writer to gain a clearer understanding of who my father was but I feel there is probably some truth in that. Rather a weird thing happened with the publication of my first book, Bloodless Shadow, a crime novel set in Oxford. My father died in September and my book came out the following January. The cover shows a man walking away under Hertford Bridge in Oxford. Incidentally the bridge is also known as the Oxford Bridge of Sighs after the one in Venice. The bridge spans a road which leads to where we lived when I was a child and the back view of the man is rather like my father. It was a weird moment when I first set eyes on it!

What are you passionate about other than your writing?

I’m passionate about human rights. I volunteer once a week at the Amnesty International Bookshop in Hammersmith, London. I love it. I find it incredibly satisfying to go rummaging through our donated second-hand books and put out on the tables items I think will interest and tempt our customers. Any Elena Ferrante novels always go quickly and last week a copy of Neruda’s poems and a complete set of Walt Whitman’s poems. Selling books can sometimes seem a lot simpler and more satisfying than working out my plot! It’s also a very good antidote to the more self-involved aspects of writing. 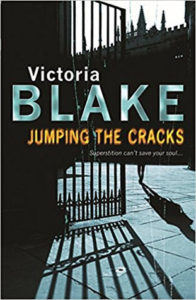 I was brought up from the age of six to eighteen in an Oxford college – Queen’s because my father was the Provost. It was a strange upbringing. One of the students at the college during that time was the actor Rowan Atkinson (Blackadder, Mr Bean and now Maigret!) and he appeared in a play in our garden called the Dog beneath the Skin by WH Auden. He played the dog! The garden was much in demand by student theatre groups because it had a seventeenth library at the end of it which created a beautiful backdrop. Another student there during that time was Tim Berners-Lee, so it’s likely that at some point between 1973 and 1976 I handed the future inventor of the World Wide Web a sausage on a stick, at one of the parties my parents had for undergraduates! 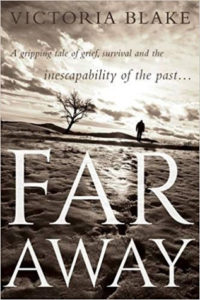 At the moment I’m working on a historical crime novel set in Oxford during the English Civil War (1643). It is probably the least like itself that Oxford ever was and I find that fascinating. King Charles made Oxford his capital and so the court came to town, the dons and students were thrown out of the colleges and courtiers and their families, including women and children, took over their rooms. Students were either sent home or enlisted to fight for the king. The city was incredibly crowded and chaotic. I’ve got a great book which lists the occupancy of many of the houses round Christ Church at the time and it includes people like the king’s doctors and his pastry chefs. The city was put under tremendous stress, the sewers overflowed, the rubbish piled up in the streets, soldiers fought each other and disease was rampant. Oxford is a city I know very well so to come across it at this point in its history when it was so very unlike its usual cerebral self is fascinating although I have to be careful in my research. For example some of the beautiful buildings that Oxford is famous for now like The Radcliffe Camera, The Sheldonian and Tom Tower of Christ Church did not exist then. It’s interesting to think that the Turf Tavern, a very famous Oxford pub, (drunk in by amongst others Bill Clinton and fictional detective, Morse) was still there but operating under the name of The Spotted Cow. A better name I think!

How do you keep going? I’ve just seen the film The Darkest Hour about Churchill with Gary Oldman playing Churchill. At the end of the film there’s the following quote that rang a lot of bells with me. “Success isn’t final, failure isn’t fatal: it’s the courage to continue that counts.” I think there’s great kindness and common sense in that quote and I immediately went home, wrote it out and stuck it up on my desk. A good quote for January!

Thank you, Victoria! It was a pleasure to feature you on my blog today. Best of luck with your work-in-progress!

You can connect with Victoria Blake on Facebook, Twitter or her website. Her books are available on Amazon UK, Amazon US, many fine bookstores and most online retailers.