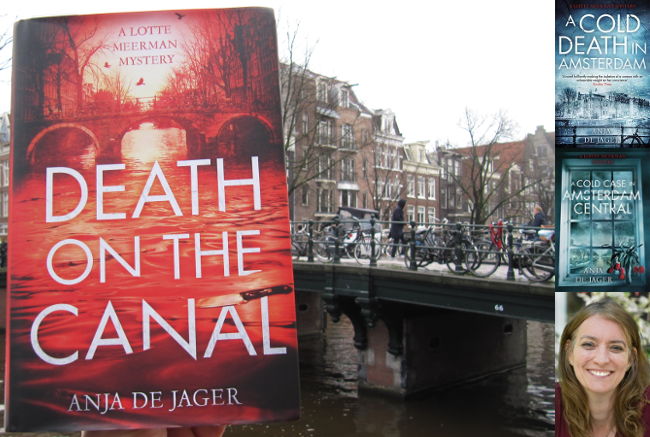 I am thrilled to welcome crime fiction author Anja de Jager to my blog today! Her Lotte Meerman series is ideal for those who enjoy a good detective story as well as want to be transported to Amsterdam. Even for someone like me who lives in this city and knows it well, it was a joy to read and fun to see the city through her eyes.  You can read my review of Death on the Canal  on TripFiction.

The first two books in the series are on my TBR pile. Though this interview makes me want to grab them now and start reading! I hope you enjoy learning about Anja, her Dutch roots, and her books. 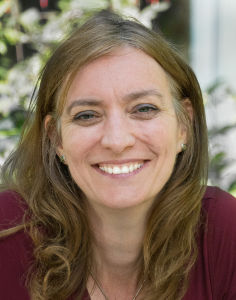 Thanks Jennifer for having me on your blog! I’m Anja de Jager. I’m Dutch but moved to London about twenty-five years ago. I’ve just finished the fourth novel in my Lotte Meerman series of crime novels which are set in Amsterdam but written in English.

I worked in finance, in the City, for more than twenty years before becoming a full-time author a couple of years ago. I used to travel extensively for my job and I wrote large parts of my first novel on a plane or in hotel rooms when I couldn’t sleep because of jet lag. It was really strange to go through edits on a book set in Amsterdam while having breakfast in Hong Kong!

The book that I’d take with me on my long trip would really depend on where I’m going. As I said, I used to do a lot of long haul travel and I always tried to read a book set in my destination. I have very fond memories of reading the excellent The Earthquake Bird by Susanna Jones as I was in Tokyo and reading Tim Winton’s Eyrie on my way to Sydney. It gave me that pleasant feeling of knowing something about the place through those books that no guidebook could ever show me. Sure, I was a visitor but the books gave me secret knowledge that only locals would have. I hope that my books do the same thing for people travelling to Amsterdam. That would make me very happy. 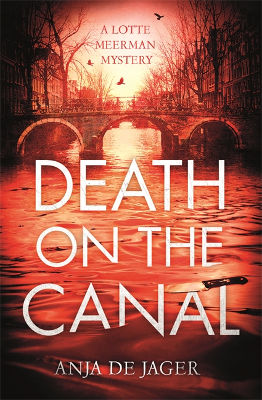 My obsession with crime started at an early age. My father was a police detective in Alkmaar which is 35km north of Amsterdam. As I got older, and understood more about his job, I came to understand how it influenced him. Every day he would mainly talk to the victims of crime, criminals and suspects.

This drove what I wanted to write about: what does the daily contact with crime do to the people who investigate it? I explore this in my entire series but especially in my first novel A Cold Death in Amsterdam. Of course, there’s a murder mystery at the heart of the book, but it’s mainly a character study of a policewoman, Detective Lotte Meerman, who has just come through a grueling investigation only to find herself caught up in a new case.

I need structure in my day, otherwise I never get anything done. After trying different things, I now have a routine down that works for me. I write for 3 hours a day, almost every day. The first hour is always the hardest. It’s like doing exercise: I never want to get started but I trust that I’ll enjoy it eventually.  For the first hour, I often sit in front of my screen thinking: ‘I don’t want to do this, I don’t want to do this’ but I force myself to stay at my desk for those sixty minutes. At some point I’ll start typing and then the story takes over and I’ll get gripped by writing again. The second hour is always the most productive because that’s when the writing flows. Most days I’ll pop out after lunch and do my final hour of writing in a café with a skinny latte because I like getting out of the house. 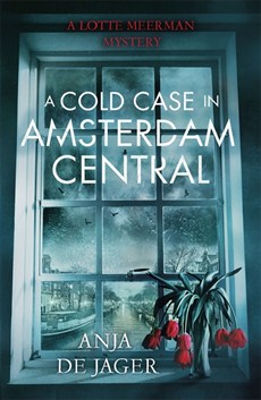 There is something about being an outsider that is very useful for a writer. I see myself as a unique insider-outsider because I’m Dutch but now live in the UK. I have a foot in both London and Amsterdam.  Whenever I go to Amsterdam, I see what’s different to the Netherlands compared to London but because I’m Dutch myself, I understand the underlying reasons for it. I know why things are like that. I think it’s very easy to misunderstand Amsterdam if you’ve only been to the tourist areas, or in fact Dutch culture as a whole if you’ve never been anywhere in the Netherlands outside of the capital.

I really enjoy exploring these topics and the discrepancy between what people think about a country and what the reality is.  The main character in my series is Dutch, and so she comments on Dutch things from a Dutch viewpoint, but I’ve written it with an eye on what non-Dutch readers would find interesting.

Setting is crucial for my books. I make an effort to spend time in the parts of Amsterdam that I write about and walk through the area to find small details that would the setting come to life. On my walks, there’s always something that catches my eye and that will make its way into the book even if it’s something as small as the birds in the Westerpark. My main character Lotte Meerman lives in the centre, on one of the canals but I want to depict the other parts of the city where tourists don’t come that often. I like combining that with landmarks that people who have been to Amsterdam on a weekend trip will definitely recognize.

I plot my entire book before I start writing. I write down what happens in each chapter on an index card and stick them on a corkboard in my office. Then I start writing and as I get further and further, I will realise that what I’ve plotted isn’t right at all. As I flesh out the characters and they become more than just names on a small piece of paper, I can’t make them act the way the plot needs them to act. So … then the plot gets changed. This happens every time and I now accept that this is part of how my brain works.

It could seem like a waste of time to carefully plot something that I know I will throw away but I know that I can’t start writing until I have some idea of where I’m going to finish. I compare it to going for a walk in the morning. As I put my shoes on, I might plan to go to the park but as I start to go that way, another path might look more attractive and I’ll end up walking along the river instead and that’s fine. I didn’t go where I had intended to, but if I hadn’t made the plan to go to the park, I would never had left the house. Writing is like that for me. I justify this process to myself in two ways: first of all, it works so why change it? But secondly as I love plotting so much, this way I get to plot over and over again.

What are you most proud of (writing-wise)? 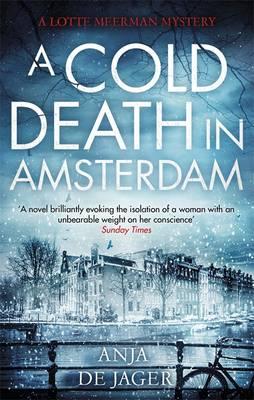 What I’m most proud of is when The Times picked A Cold Death in Amsterdam as one of their Crime Books of the Year. I felt that the reviewer understood what I’d been trying to achieve and that was such a thrill. It was even more special as my parents were over in London that weekend. We were having breakfast together as I saw my name in the reviews. That was already great but then I noticed it was in the Books of the Year section. It was a great moment and I was happy that I could share it with them.

But actually, every time someone gets in touch via Social Media or in person, and tells me how much they enjoy reading my books, it’s so nice. I think sometimes people have no idea how much it means to an author to hear this!

I can’t be without books, so I can’t even imagine not reading. That said, I don’t read much crime fiction while I’m writing my first draft. Not necessarily that I think I’ll be influenced by the plot but it’s more that as my brain is busy creating a new mystery, I can’t seem to concentrate on solving someone else’s. I love reading in all kinds of different genres but I really enjoy reading Sci-Fi or Fantasy as I’m writing my first draft. It takes me out of the world that I’m writing about and that’s what I need at that stage. But also, SF has to work hard to familiarize a reader with a place they know nothing about. It’s what I try to do in a very small way for Amsterdam and it’s fun to see how a different genre does that for a whole world.

Thanks for stopping by, Anja! I enjoyed seeing Amsterdam through your eyes in Death on the Canal and look forward to reading more about Lotte Meerman’s investigations quite soon. Take care!

You can connect with Anja through her website, Facebook, or Twitter. Her books are available at all fine bookstores and retailers. Here is a direct link to her Amazon Author page.

On March 27, 2018, the first novel in the Lotte Meerman series will be released as paperback  in the United States! Congratulations, Anja!

A Cold Death in Amsterdam

Set in Amsterdam, the novel introduces Lotte Meerman, a Cold Case detective still recovering from the emotional devastation of her previous investigation. A tip-off leads Lotte to an unresolved ten-year-old murder case in which her father was the lead detective. When she discovers irregularities surrounding the original investigation that make him a suspect, she decides to cover for him. She doesn’t tell her boss about the family connection and jeopardizes her career by hiding evidence. Now she has to find the real murderer before her acts are discovered, otherwise her father will go to jail and she will lose her job, the one thing in life she still takes pride in . . .