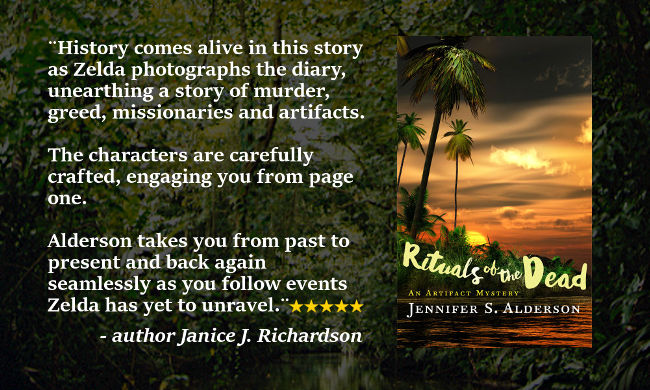 Here is a short excerpt of my latest novel, Rituals of the Dead: An Artifact Mystery (Book Three in the Adventures of Zelda Richardson series). In this passage, Zelda and her friend Friedrich are visiting the Mission Museum in Steyl for the first time. Here are their impressions of this impressive collection. If you want to read my article about my own visit to this fascinating museum, click here.

Rituals of the Dead: An Artifact Mystery Excerpt

Zelda followed begrudgingly, gasping as she entered the dark space. Her eyes were riveted on a podium on the right side of the room. Through a large skylight, a halo of light shone down onto a plethora of jungle creatures. Zelda felt drawn to the light. Ignoring the rest, she walked toward the large beasts. A giraffe, tiger, rhinoceros, antelope, and several other large African mammals were displayed on a raised platform. None were posed as she was used to seeing them—pouncing or with teeth bared. The animals looked to be out on a leisurely stroll. Zelda figured this was a conscious decision so as not to alarm the parishioners.

From a cursory glance at their website, she knew the museum had been created to provide visitors a glimpse into the world the order’s missionaries inhabited. They have definitely done the animal kingdom justice, she observed. Behind the larger animals were cases built into the walls housing smaller mammals and birds. She gazed into an aviary—birds of paradise, parrots, and cockatoos stared down at her from branches mounted on the wall. Their beaks were slightly open, colorful wings spread out and their heads cocked, forever in wonder.

She opened the museum’s information folder. “The museum’s collection is comprised of objects acquired by missionaries in China, Argentina, Papua New Guinea, Indonesia, Togo, Ghana, Japan, Nigeria and more, as early as 1883,” Zelda read aloud. “Ritual objects, ethnographic artifacts, and the carcasses of exotic animals were all sent back.”

“Whoa! They are really old. I wonder how they keep them looking so good?” Friedrich wondered aloud.

Zelda skimmed the rest of the folder in search of the answer. “I’m not sure, but check this out—the classification system used in the museum hasn’t been updated since 1931, though pieces are continually added to the displays. Now the display cases are a time capsule, a sort of wunderkammer used to explain how museum exhibitions were once created and how Western missionaries saw their flock in the early 1900s.”

Zelda looked to the left side of the room, at the four long cases containing the ethnographic collection, each easily ten feet tall and twenty feet long. The objects were split into displays dedicated to Japan, Indonesia, Papua New Guinea, and Africa. In contrast to the well-organized and somewhat sparse Japanese case, the other three were a crowded mishmash of objects placed according to what looked good.

Zelda’s mouth fell open as she took in the gorgeous ancestor statues, lattice-carved paddles, colorful headdresses, turtle shell jewelry, woven armbands, carved flutes, and a multitude of spears filling the case labeled Papua New Guinea. Zelda couldn’t believe how beautifully carved and decorated they were. She had seen many of the objects from Leiden and Rotterdam that were to be displayed in the upcoming Bis Poles exhibition, but these were superior in quality and preservation.

Friedrich called out, breaking her thoughts, “Zelda, you should see this.” He’d already walked around to the other side of the long display case.

She sidled up next to him and followed the direction of his finger toward a sleeping bag made of woven reed. To protect against mosquitoes, according to the small slip of paper lying on top of it. She started to say something snotty when she noticed five hatchets displayed just above it on a glass shelf. Their large stone blades were attached to a carved wooden handle by a wide band of twine. She sucked in her breath as her eyes grew wide in astonishment. From her research, she knew these were rare commodities, most having been destroyed in the 1950s. She took in the flat stone blades, still dull despite obvious attempts at sharpening them. How many times had these axes been used to kill or maim an enemy, she wondered.

Her eyebrows shot up, and her mouth fell open when she read the sign placed between them: Stone axes (from the Stone Age).

How often had she read in Nicholas’s journal about the Church’s attempts to drag the Asmat out of the Stone Age? His frequent entries didn’t reveal an obsession, as she suspected. This really was how the Church thought back then. It was somewhat relieving to see proof of their standpoint for herself, yet that sign still made her feel uncomfortable. It was strange to find this reminder of how Western missionaries viewed another people less than a hundred years earlier in a museum display.

“What do you mean?” Friedrich asked.

Zelda yelped and sprang around.

If you enjoyed this excerpt, why not pick up the book? Rituals of the Dead: An Artifact Mystery is now available as paperback and eBook via Amazon, iBooks, Kobo, Barnes and Noble NOOK, Google Play, Smashwords, or your favorite retailer.

One thought on “Rituals of the Dead: An Artifact Mystery Excerpt – Visit to Mission Museum Steyl”