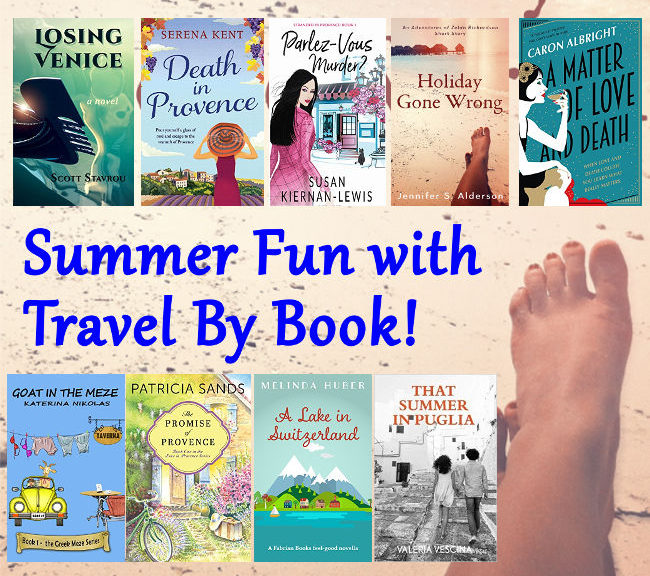 We have a fun promo for you this week, folks! Looking for a bit of light summer reading? Why not pick up one of these fabulous books and transport yourself to an exotic, possibly romantic and definitely fascinating location this summer?

A Matter of Love and Death: a historical mystery by Caron Albright 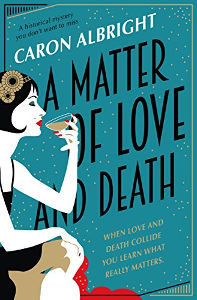 She decides to put it behind her, a task helped by the arrival of their new lodger, Phil. Phil takes her to a nightclub, where she meets charming but slightly dangerous club owner Jack. Jack’s no angel – prohibition is in force, and what’s a nightclub without champagne? But he’s a good man, and when Frances’ earlier fears resurface she knows that he’s the person to confide in.

Frances and Jack’s hunt for the truth put them in grave danger, and soon enough Frances will learn that some things are a matter of love and death… 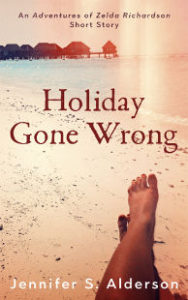 After a tiresome year of computer programming, Zelda Richardson is back on the road – destination Panama and Costa Rica. Learning to scuba dive, exploring Central American rainforests, and climbing a volcano sounded like the perfect antidotes to Seattle’s spring rains.

When a banana farmer tells her about the Disquís spheres he found on his property, she can’t resist going to the site. Her visit puts a deadly spin on her vacation and leaves her fighting for her life.

Despite Zelda’s best efforts to just relax and enjoy her trip, thrilling mysteries pop up at every turn. Will she ever be able to go on holiday without it turning into an international incident?

How did Zelda Richardson get from Nepal in Down and Out in Kathmandu to Amsterdam in The Lover’s Portrait? This short story will help fans better understand this unintentional amateur sleuth’s decision to study art history and give new readers a taste of her tantalizing misadventures.

A Lake in Switzerland by Melinda Huber 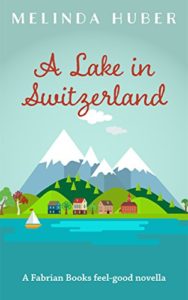 Stacy can’t believe her luck when her best friend Emily invites her on a holiday to Switzerland.

She arrives at the Lakeside Hotel with high hopes, but the problems begin straightaway. Emily’s recent injury doesn’t let her do much, and something is wrong at the hotel. Where are all the guests? Why is the owner’s son so bad-tempered? And then there’s the odd behaviour of Stacy’s fiancé, back home.

By the last day of the holiday, Stacy knows her life will never be the same again – but the end of the week is just the beginning of the Lakeside adventure.

Death in Provence by Serena Kent 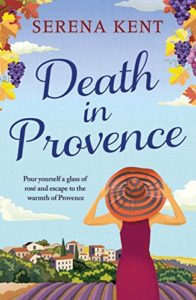 When Penelope Kite swaps her humdrum life in Surrey for a picturesque farmhouse in the south of France, she imagines a simple life of long lunches and chilled rosé . . . What she doesn’t imagine is the dead body floating in her swimming pool.

Convinced that the victim suffered more than a drunken accident, Penelope plunges headlong into local intrigue and long-simmering resentments to uncover the truth.

But with a meddling estate agent, an unfriendly Chief of Police, a suspiciously charming Mayor, and the endless temptation of that second pain au chocolat, life in the delightful village of St Merlot is certainly never simple. . .

Curl up and escape to the sunshine of Provence with this deliciously entertaining mystery!

“My name is Jules Hooker. I have lived through a few crappy moments in my life—and with a name like Hooker, you can just imagine—but nothing, nothing, compares to the two intensely and world-shatteringly crappy things that happened to me this last June. Three, I guess, if you count Gilbert.

After my boyfriend dumped me on the day I thought he was going to propose, I’d have to say two other really bad things happened last June. The first would have to be the dead body I discovered in the rental house in France where I went to get over being dumped.

The second—and very possibly I should have led with this—was the dirty bomb that exploded over the Riviera throwing me and everyone else in France back to the 1950s.

So now I’m stranded here—trying to make a living by solving murders the old fashioned way — without help from DNA, databases, CSI crime labs or the police. And I’m doing it in France. Where I do not speak the language. During the apocalypse. Sound like fun?”

Pick it up now for FREE at Amazon or your favorite retailer.

Goat In The Meze by Katerina Nikolas 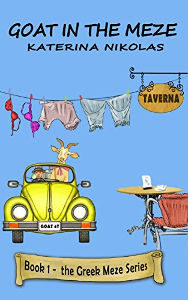 A hapless American couple who are stranded in the bonkers backwater Greek village of Astakos are befuddled and bemused by the antics of the villagers who charm and outrage them with their quirky ways.
The elusive underwear thief is busy plundering the local washing lines hoping his identity will never be revealed, whilst the Pappas is up to his neck in nefarious schemes. Mail order Russian bride Masha is indulged by that old fool Vasilis in her passion for plastic surgery, and Stavroula plots to extricate herself from her marriage to the supposedly dead Toothless Tasos.
Not a day goes by in Astakos without deviousness and humour as part of the scenic backdrop.
The humorous antics of life in a fictional Greek village have the feel good factor to make you laugh-out-loud.

The Promise of Provence by Patricia Sands 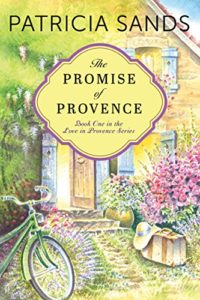 On the evening of her twenty-second wedding anniversary, Katherine Price can’t wait to celebrate. But instead of receiving an anniversary card from her husband, she finds a note asking for a divorce.

Fifty-five and suddenly alone, Katherine begins the daunting task of starting over. She has her friends, her aging mother, and her career to occupy her, but the future seems to hold little promise—until, after a winter of heartbreak, Katherine is persuaded to try a home exchange holiday in the South of France.

In Provence, bright fields of flowers bloom below medieval hilltop villages with winding cobblestone streets. Charmed by the picturesque countryside, the breathtaking Côte d’Azur, and the enchantment-filled boulevards of Paris, Katherine feels life opening up once again. Lavender perfumes the air, and chance encounters hint at romance and passion. But memories of heartbreak and betrayal linger—and her former life waits for her back home. Can she find the courage to begin again? 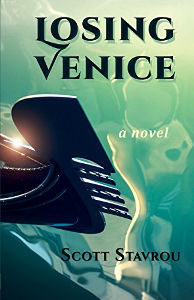 Surrounded by beauty, can you learn to live beautifully?

Travel marketing executive Mark Vandermar leads an itinerant life. Elsewhere is where he calls home, so it’s no surprise when he’s called to Venice to help craft the Venice Tourism Council’s new campaign to attract skittish post-September 11 American tourism dollars.
As he gets to know Venice’s colorful campos and canals, his relationship with Venice grows more complex and its fascinating history both influences him and becomes a mirror reflecting the turbulence of the early twenty first century. In addition to Venice, Mark’s journey of discovery unfolds among some of Europe’s most captivating locales, including Prague, Budapest and the Greek islands where he encounters a cast of compelling characters that lead to life-changing consequences.

The geography of his new life is marked with discovery and reinvention, but what he really seeks is to learn to live beautifully, to find a place and a person to call home.

Like the finest expatriate novels, Losing Venice is as richly textured as its fabled locales and dives deeply into the possibilities, perils, and pleasures of learning how not to be lost.

That Summer in Puglia by Valeria Vescina 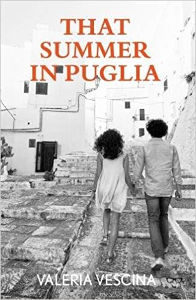 Tommaso has escaped discovery for thirty years but a young private investigator, Will, has tracked him down. Tommaso asks him to pretend never to have found him. To persuade Will, Tommaso recounts the story of his life and his great love. In the process, he comes to recognise his true role in the events which unfolded, and the legacy of unresolved grief. Now he’s being presented with a second chance – but is he ready to pay the price it exacts?

That Summer In Puglia is a tale of love, loss, the perils of self-deception and the power of compassion. Puglia offers an ideal setting: its layers of history are integral to the story, itself an excavation of a man’s past; Tommaso’s increasingly vivid memories of its sensuous colours, aromas and tastes, and of how it felt to love and be loved, eventually transform the discomforting tone with which he at first tries to keep Will and painful truths at a distance. This remarkable debut combines a gripping plot and perceptive insights into human nature with delicate lyricism.