Today, I welcome Mystery Thriller Week author Leta Serafim to my blog. I enjoyed learning more about her past as a ‘stringer’ for the Boston Globe and her time living in Greece. I choose to review her book because of the Greek setting; her descriptions of the country, culture and peoples did not disappoint. 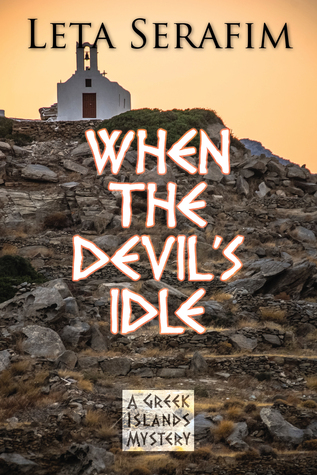 When the Devil’s Idle is a dark detective novel centered around Yannis Patronas, an esteemed Greek policeman. An elderly German tourist is found dead in his rented gardens, a Swastika carved into his forehead. When the local police force asks for help, Patronas is sent to the small village of Chora on the Greek island of Patmos to lead the investigation. His investigation quickly turns into an investigation into Greece’s World War Two past and many of the atrocities the Nazis perpetrated during the occupation.

I didn’t realize until I’d started it that this is the second book in a series of three. There are occasional references to Patronas’ previous name-making case, yet it easily reads as a stand-alone.

I wanted to review this book for Mystery Thriller Week because I was interested in learning more about the history of Greece during World War Two. It did not disappoint. The story is steeped in Greek history, the political climate, resistance movements, impact on local citizens and disturbing examples of the Nazis’ sadistic abuse of power. The author had clearly spent much time and effort studying this era and her extensive research adds depth to the story and characters.

I read a lot of travel fiction because I love to learn about other countries and cultures. This book’s strength is its detailed descriptions of Greece itself: the people, places, churches, politics, culture and modern history. Her affection for Greek culture shines through.

One of the struggling points I had with this novel were the often racist remarks made by Greek characters when discussing pretty much every other European nationality. Though several of the characters openly wonder why they harbor ill feelings towards citizens of other countries, they continued to make discriminatory remarks throughout the story. I wondered why the author found it necessary to include so many of these types of comments in her dialogue when they weren’t important to the storyline. As a citizen of another European country, I truly hope this doesn’t reflect the mindset of the average Greek citizen! This also made it difficult for me to connect with the characters.

The author’s attention to detail, of both historical fact and descriptions of the local landscape, make it a pleasurable read. It’d recommend this book to mystery fans interested in learning more about Greek history or the country.

My first job was writing paid obituaries at the Washington Post. I eventually talked myself into a job as a copy aide on the national desk in the news room and then from there I went onto the Washington Bureau of the LA Times, where I did research and ran the so-called ‘morgue,’ or library. It was a job I loved and the memory of working with those reporters on Watergate is a memory I will cherish until the day I die. When my husband and I returned to the United States after six years in Greece, I worked as a stringer for the Boston Globe, writing stories intermittently while raising our two daughters. I always wrote fiction, but decided to focus on it relatively late in life. I decided to start with a mystery since I love the genre. The first installment of my Greek Island Mystery series, The Devil Takes Half was the result, published in 2004.

Traveling, attending world music events in Boston, walking in the conservation land near my home, playing with my grandchildren, cooking.

My time in Greece was hugely influential. I had both my children there and though I am not Greek, remain deeply committed to that country. I have visited over 27 islands in the course of my marriage and return there every summer.

I pour myself a big cup of coffee and start pounding the keys of the computer around 11 a.m. If I’m having a good day, I work five or six hours straight. However, that said, I also play a lot of spyder solitaire and fool around on Facebook.

What is the inspiration behind your Greek Mysteries series?

I love Donna Leon’s mysteries which take place in Venice. Also Andreas Carvalleri’s and Michael Didbin’s which take place in Italy and Sicily respectively. I wanted to do something similar, using Greece as a setting. The juxtaposition between human cruelty and the incredible beauty of the landscape also struck me there and I wanted to write about it.

I read mysteries and thought when I started it would be easier. The plot is ready made, etc. It is not, I’ve found to my dismay. Each book requires a solution to a complicated problem—the motivation of the killer being the one I continue to struggle with.

Partially because of my background, I research each book thoroughly. I spent months preparing to write my historic novel, To Look on Death No More, which depicts an actual massacre of Greek civilians by Nazi forces during World War II.

Yes, most probably in my world-weary detective, Yannis Patronas, who seeks to do the right thing, but often makes a mess of it in both his personal and private life.

I tend to stay away from authors doing the same thing I am—i.e. Donna Leon—when I am writing as I tend to get intimidated by their mastery and it shuts me down.

Tell me more about your work-in-progress?

I am now at work on the fourth in the series, What the Wind Gathers, which takes place on the island of Spetses.

Fyodor Dostoyevsky, who was a rascal, but the greatest writer who ever lived, and maybe Sister Teresa, or some other figure motivated by faith. I’d love to listen to them discuss the Grand Inquisitor and debate the hand of God in human affairs. Or perhaps a couple of funny people, maybe the Marx Brothers. The older I get, the more I value laughter. 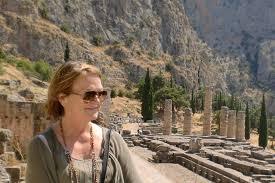 Leta Serafim was a journalist at the Los Angeles Times Washington Bureau before moving to Greece, where she taught art and illustrated books. Upon her return to the United States, she wrote feature stories for the Boston Globe before trying her hand at fiction. She continues to spend her summers in Greece.

In the Book of Revelation, written by St. John on the Greek island of Patmos, it was said a pale horse would appear whose rider was death, others would cry out for vengeance, and the stars of heaven would fall to the earth. Death does indeed come to Patmos when a German tourist is found murdered in the garden of one of the island’s fabled estates. Yiannis Patronas, Chief Officer of the Chios police, is called in to investigate. He summons his top detective, Giorgos Tembelos, and his friend and amateur sleuth, Papa Michalis, to assist him. What the policemen discover will disturb them long after the conclusion of the case. Only six people were at the house at the time of the murder—the gardener and housekeeper, the victim’s son and his wife and their two children, a boy of seven and a teenage girl of sixteen. All appear to be innocent. But access to the isolated estate is severely restricted. Surrounded by high walls, it has only one entrance: a metal gate that was bolted at the time of the crime. Patronas can only conclude that one of the six is a killer. He continues to probe, uncovering the family’s many secrets. Some are very old, others more recent. All are horrifying. But which of these secrets led to murder? Book 2 of the Greek Islands Mystery series, which began with The Devil Takes Half.

One thought on “MTW: Review of When the Devil’s Idle and interview with Leta Serafim”