It’s my pleasure to have author Kaye George on my blog today. Her book Choke was the first one I picked to review for Mystery Thriller Week because the excerpt cracked me up! This enjoyable cozy mystery did not disappoint. Read my 4 star review and a fun interview with this Agatha nominated short story and novel writer.

My review of Choke by Kaye George 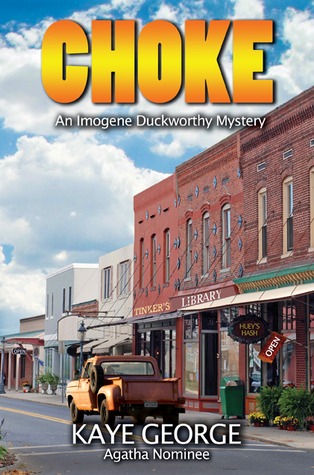 Imogene Duckworthy is a feisty, twenty-two-year-old unwed mother and amateur sleuth. When her uncle is killed by frozen sausage in the office of the family restaurant, the police quickly point the finger at her mother. Though not entirely convinced of her innocence, Imogene investigates, organizes a jail break and investigates some more, doing her best to find the true culprit before her mother is sentenced for murder.

With the help from the restaurant’s staff, her love interest, a friendly cop, and her mother, Imogene deftly solves the case and finds the real killer in the nick of time.

The author’s done an excellent job a murder mystery that grows more complex with every chapter. I especially enjoyed the often silly predicaments Imogene finds herself in. The author’s style of writing is quite accessible, making it easy to get lost in the story.

Choke is a fun read about a small town filled with eccentric characters and a naïve, yet loveable, protagonist. Those who love to read cozy mysteries with gutsy amateur sleuths in the lead role will enjoy this one.

My last job before writer was a computer programmer. I started writing full time after I gave that up. I had written short stories for a long time, sending them in to top magazines and collecting drawers full of rejection slips. When I retired and decided to get serious about writing, I started in on novels, thinking they would be easier to get published than short stories. (I know, pretty funny, right?) I kept writing short stories in the ten years it took me to get published and, from getting to know more about writing, and the writing community, I started to get those into print. Choke was the first novel I got published, but not the first one I finished, of course. There are “drawer novels.”

One book? I’ve never traveled with one book. In fact, that’s about the only time I use my e-reader. I load it up before I leave. If there were a brand new Harlan Coben out, I’d probably take that.

Absolute silence. Or ball games of some sort. Living with my husband for many years has taught me how to ignore those. Some sort of sport is being played in the den right now. I imagine it’s football? Being a musician, it’s impossible for me to listen to music without participating in it, actively listening for patterns, harmonies, form, and so forth. Just as it’s almost impossible for me to read a mystery for enjoyment any more. I have to analyze them instead.

Usually at my desk top computer in my office (aka spare bedroom). Sometimes I take my AlphaSmart with me and can crank out some words on that away from home. I prefer that to composing on my laptop because of the nicer keyboard.

Reading, of course. I enjoy music, either singing or playing, or listening. I love gardening, going to writing conferences and mingling with my own kind. I also love traveling. I’m one of the few people I know of who loves to fly. There’s a feeling I get as the huge metal thing leaves the ground and starts to rise—love it every single time!

All of it, I think. Everything I’ve heard or seen or read or done. It all goes into the hopper, my brain, and sloshes around in the primordial ooze, getting consolidated and reconfigured. Then out pops a plot, some characters, and, if I’m lucky, a bunch of snappy dialogue.

You write in several genres, why?

I write mostly mysteries, but I do write from light to dark. Some subjects, for me, call for a heavier hand, some for a lighter touch. This isn’t true of all my work, but for much of it, I’ve noticed that the shorter pieces tend to be darker, some almost noir, and my longer work is fairly sunshiny. I was a member of a group with younger writers when I lived in Austin. We first met in the bar at the Writers’ League of Texas Conference in Austin and hit it off. They wrote more toward speculative fiction and I wrote some of that with them. We put out an anthology called All Things Dark and Dastardly. I have three more short stories I consider dark fantasy that were written then and are for sale individually on Amazon. Another was developed and published in BJ Bourg’s Flash Bang Magazine.

Not really, but, on the other hand, there’s some of me in all of them. After all, where else would they come from?

I’m trying to finish the fourth Imogene Duckworthy book, Stroke, and am also writing a first draft of a new novel, the first in a new cozy series that will come out in 2018. I’m also collecting submissions for an anthology I’m putting together called Day of the Dark. The stories will be in honor of the coming total solar eclipse in August, and will have elements of mystery or crime and some sort of eclipse theme. Wildside Press will publish it. I’ve had some terrific submissions so far. I’m pretty excited about all these projects! I just have to figure out when to eat and sleep.

To find out more about Kaye George and her books, visit http://KayeGeorge.com. 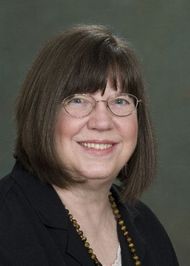 Kaye George, an Agatha nominated short story and novel writer, is the author of the Imogene Duckworthy Mystery series (Agatha nomination for best first novel), EINE KLEINE MURDER by Barking Rain Press (Silver Falchion Award finalist), DEATH IN THE TIME OF ICE (A Neanderthal Mystery) (Agatha nominee and Silver Falchion finalist) and the Fat Cat Mystery series by Berkley Prime Crime (as Janet Cantrell), as well as A PATCHWORK OF STORIES, a collection of her previously published stories, and several stories available at Untreed Reads. Other short stories appears in various magazines and anthologies.

She reviews for “Suspense Magazine”, and writes for several newsletters and blogs. Past president of Guppies chapter of Sisters in Crime.

She and her husband live in Tennessee.